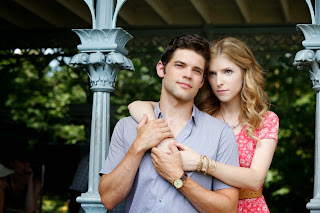 Unless you are a Off-Broadway musical nerd, you probably have not heard of The Last Five years which was written by Jason Robert Brown. It premiered in Chicago's Northlight Theater in 2001 and has numerous productions in several countries though out the years. The movie version is directed and written by Richard LaGravenese (Beautiful Creatures, P.S. I Love You, Freedom Writers). The entire story is told in song by Anna Kendrick and Jeremy Jordan covering the last five years of their relationship together.

The movie begins with Cathy (Anna Kendrick) lamenting the ending of her marriage with Jamie (Jeremy Jordon). The song “Still Hurting” is sung while Cathy sits sad, washed out in her empty New York brownstone, with pictures of her and Jamie in happier times. The next song “Shiksa Goddess” is told from Jamie's point of view from the beginning of their relationship. Unless you are already familiar with the story, it's hard to understand that Cathy's story is told from the end to beginning, and Jamie's is beginning to the end. Their stories connect when their time intersects at their wedding.

Cathy is a struggling actress who has not been able to find work and ends up having to go to Ohio to work the summer musical theater program. Jamie is a novelist who becomes successful and his book becomes a number one best seller. His rise to fame is fast and heady. He's happy and suddenly tempted even though he loves Cathy. He's young and it's hard to resist. Cathy, although she is supportive as when she sings “I'm Part of That”, seems to be just a prop at the numerous parties that are given for Jamie. She becomes too frustrated even though Jamie sings “If I Didn't Believe in You”, it's just not enough to go to events and watch his fan girls drape themselves all over him.

They can both see that it's falling apart. Kendricks wrings the heartstrings when she sings “See I'm Smiling” when he comes to see her in Ohio, but has to go back that night. She was hoping they could work it out that weekend and it's her birthday. It ends in argument. In their happier days they are both emotionally and physically drawn to each other. But life has a way of making things difficult and the last song “Goodbye Until Tomorrow/I Could Never Rescue You” is sad and the audience is left with a small hope they could find each other again.

The whole movie goes from one song to another with the lyrics propelling the story. Plus the whole movie is only sung by the two main stars. On stage the feeling is probably more stagnant, while the movie version travels around New York giving it more life. Kendrick has proven her bona fide movie creds, while Jordan is mostly known for his role as Jimmy in Smash. Both have wonderful voices that give this story some emotional angst. This is for those who really love musicals.
(Review by reesa)