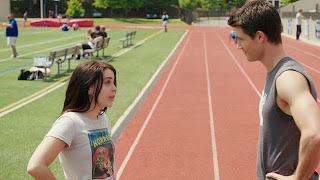 For most of y'all who don't know, which is pretty much everyone, a D.U.F.F means Designated Ugly Fat Friend. Another typical teenage bully tactic to undermine the already fragile psyche of high schoolers. In this comedy by Ari Sandel and written by Josh A. Cagan is based on the novel of the same name by Kody Keplinger. The Duff's purpose is to serve as a gateway to info mining on the Duff's more attractive friends. Usually the Duff is just happy that someone is talking to them and doesn't realize they are just being used.

Bianca Piper (Mae Whitman) is a scrubby nerdy senior who has two beautiful besties Casey and Jessica (Bianca Santos and Skyler Samuels). Everything is great with them until Wesley (Robbie Amell), her next door neighbor, womanizer and top jock lets her know that she's their Duff. That she is only allowed with them to make them look better. Instead of trusting her childhood friends, Bianca spirals into a harpy meltdown and alienates them in order to set herself up with a new identity.

Her mom (Allison Janney) had fallen into a depression after her divorce until she reinvented her self as a pantsuit wearing motivational speaker. She tries to offer Bianca some advice, but instead Bianca enlists the help of Wesley to help erase the label in exchange for helping him pass chemistry. Since Bianca has a crush on a guitar playing Toby (Nick Eversman), Wesley advises her on creating a new look and challenges her on how to speak to males by approaching random guys at the mall. This is all fun and dandy, but the movie's mean girl Madison (Bella Thorne) who aims to be the next reality star uses her minions ever ready camera to capture some of Bianca's more embarrassing exercises them broadcasting them via social media.

Teen movies come and go, but few stand the test of time like John Hughes films that speak to the more universal truth of surviving high school. There are lots of goofy moments like Ken Jeong is a blast as the editor of the school newspaper. Whitman (Arrested Development and Parenthood) is wonderfully endearing as Bianca. She's funny, smart and unpredictable. Her best friends are nicely portrayed as being loyal and uncatty. The viral ruin of her reputation is met with brutal honesty, but Whitman infuses Bianca with resilience and spunk which keeps this from being another stupid teen stereotype.
(Review by reesa)

Email ThisBlogThis!Share to TwitterShare to FacebookShare to Pinterest
Labels: The Duff review