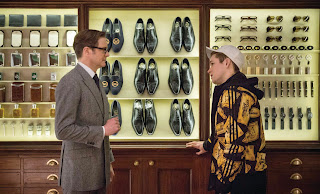 In director's Matthew Vaughn's new feature based on a the acclaimed comic book The Secret Service by Dave Gibbons and Mark Millar, the film explores the adventures of a secret secret agency of agents who are nattily dressed. Vaughn (Kick-Ass, X-Men: First Class, Snatch) who wrote the screenplay with Jane Goldman created an entertaining, high action, uber violent yet comedic world through the eyes of the hero recruit and his mentor. If nothing else, hopefully this film will inspire men to enjoy and dress in tailored suits, plus have impeccable manners.

Harry Hart (Colin Firth) also known as Galahad was on a mission where one of his men lost his life while saving the team. Harry personally visits the mans' family giving them a medal of honor from the Kingsman with a number etched on the back if they ever needed help to call and deliver a coded message. Some seventeen years later, the son of the hero, Eggsy (Taron Egerton) who is now in his early 20's gets in trouble for joyriding in a stolen car and he calls the number. Harry gets him released and offers him an opportunity to help save the world.

Harry's boss, Arthur, (Michael Caine) doesn't think that Eggsy should be considered to train as he's not the right type of class that is expected of their organization. Yet, Eggsy is thrown in with the other well heeled snobby lot where he of course excels by his street smarts and his unfailing tenacity. Their instructor Merlin (Mark Strong) puts them some crazy exercises to weed out the candidates for the one opening that was made available after they lost Lancelot. All the agents have names from King Arthur's court as the Kingsmen are considered the Knights of the Roundtable. They have tons of tech and toys to back up their operations like poison pens, lighter grenades, knives in shoes, typical Bond type of tools.

Meanwhile the Kingsmen are investigating technological tycoon Richmond Valentine (Samuel L. Jackson with a lisp) who is giving away free phone SIM cards all around the world. He also may be involved in the disappearance of VIPs, including a Swedish princess. When Harry questions Professor Arnold (Mark Hamill), a mysterious implanted chip in his head explodes killing the professor and injuring Harry. When he recovers he finds Valentine doing an experiment on an American Midwest church where all hell breaks loose, including Harry. Whatever it was was instigated by the SIM card. It's up to the Kingsman to track down Valentine and stop him.

There is a ton of action in the film with some crazy set ups with Valentine's main hench woman, Gazelle (Sofia Boutella) who sports weaponized prosthetic legs. What she does with those legs are pretty outrageous. But you have to remember this comes from a comic book, so the violence has to be considerably graphic. Lots of laughs when various celebrities and politicians heads blow up in a colorful rainbow of fireworks and classical music. Firth is great as Galahad training Eggsy the importance of a well tailored suit. Something that should be encouraged in today's young men wearing pants below their butts.
(Review by reesa)