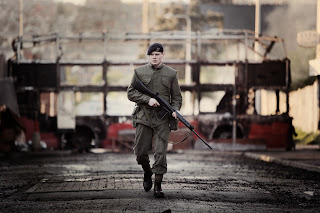 When your budget is as small as this film and can deliver the suspenseful action that most big Hollywood budget horror/thriller films cannot, then you know you have something special. This is a gripping film about a soldier who is trying to survive in the cold, vacant streets of Belfast while being chased by crooked men and being rescued by his unit that he got separated by. That’s all, folks. It’s essentially a survival movie of this guy in the middle of a war among the streets. But, this is a compelling movie and you are rooting for him to get out of this hellish situation triumphantly. The direction is solid as Yann Demange takes this small budget and really turns it into a gritty film and really sets us on edge. There is a lot of backstabbing and espionage and almost feels like an old school film from the 70’s, which is great because the movie is set in the year 1971. The acting is on point as Jack O’Connell leads this film and really shows us that he can act. This film came out last year before Unbroken so this was the first exposure we had to O’ Connell and now I know why he is a rising star. The supporting cast is good, but, ultimately, it’s Jack’s film and the other cast members are a good push to just elevate everyone’s performances. The cinematography is a combination of shaky and handy cam and at points it was a bit much. There were a few chase scenes that caused the camera to have a worse seizure than an elderly person. Listen, I don’t mind shaky cam. I think it adds the heighten sense of realism and I feel like I am running with the main character, but sometimes it was unbearable. Just tone it down, that’s all. I do however love the lighting as it relies heavily on the street lights and lights around buildings, for the most part. It just makes it more suspenseful, and once again, puts you in that situation. It just adds the darkness to this nightmare and makes it better. The pace of this film is dead on. It’s about an hour and forty minutes and it flew by for me. I was engaged as soon as it started and it really sinks its teeth into you. Overall, this is a gritty survival film that will keep your fist clenched and rooting for Jack O’ Connell, who is bound to be a bigger star in the future. 8.5/10
(Review by Chase Lee)