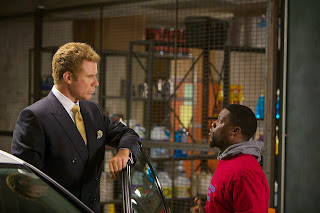 Get Hard doesn’t reach its full potential and ends up being a bit flaccid. See what I did there? Hopefully there won’t be any more jokes like that, but I can’t promise anything. This is the newest Will Ferrell romp and I have always respected the guy and enjoy most of his comedies, but this one was just okay. Director Etan Cohen told the audience that this was his first feature-length directed film and it definitely shows. It felt average, bland, uninspired and a bit lazy. It was a simple story, co-written by Cohen, which really wasn’t anything to talk about as it felt like a story Naked Gun would have. The whole movie felt like one SNL set piece to the next with no strong through line going from joke to joke. Some of the humor was funny and I found myself laughing until my side hurt, but that’s far and few in-between as most the jokes fell flat or they felt like they were trying very hard. This wasn’t a bad first film, but Cohen can only get better from here. Will Ferrell is a loveable oaf and he provides some laughs but this is Kevin Hart’s movie. Hart is always electric in anything he does and definitely shines a bright light anytime he is on screen. The on-screen duo of Ferrell and Hart is the positive side and every time they are on together the comedy fireworks happen. The supporting cast is very forgettable and Alison Brie is gorgeous, funny and talented; but she was wasted in this. The cinematography is just average and there is nothing inventive. The pace and flow of the film does keep you entertained with comedy that keeps this film going, even though some of it doesn’t work. Overall, this is an average raunchy comedy and it’s entertaining, but ultimately it’s just OK. I am glad that Ferrell and Hart teamed up finally and this isn’t a bad one to start off this comradery. Listen, I see a lot of raunchy comedies and you need to standout. I can only see the same dick joke over and over again, but if its spun differently (writing, editing or the way its shot), I will enjoy it a lot more. You are probably thinking, “If it’s so easy you make a comedy.” I will be glad to…and then only to realize I am not funny in the slightest and I am about as funny as a wet napkin. 5/10
(Review Chase Lee)