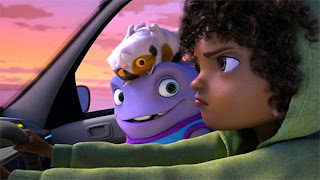 DreamWorks has made some animated classics and then they have made us some so-so movies. Shrek and How to Train Your Dragon show the magic that this company can deliver, but then you have films like Over the Hedge and Shrek 3 that put a damper on your soul. Where does Home lie? It’s actually one of the best ones they have made. Director Tim Johnson creates a rich, beautiful world that is gorgeously animated, except that world is earth. The settings looked so real, I forgot I was watching an animated film. I had to remind myself that the aliens were on earth and no some weird planet across the galaxy. He takes a good story about family and having a home and makes a touching, adorable adventure kids and adults will enjoy. Here is where I had my issues, the voice casting. Jim Parsons, expert nerd on The Big Bang Theory, voices Oh. Oh is running from his own race and has to stop a potential mistake that might wipe out their race with the help of Tip voiced by Rihanna. I am not going to lie; Jim Parson’s voice took me awhile to adjust to since all I pictured was Sheldon off of Big Bang. About midway through the movie is when I could actually see Oh, a care-free alien just looking to fit in among his peers, versus Sheldon Cooper reciting lines in a smelly recording booth in Los Angeles somewhere. However, I thought Rihanna was a miscast. Tip is a little girl and Rihanna has this smooth, seductive voice and it didn’t work for me. She gave a good vocal performance, but I couldn’t believe she was trying to portray a little girl. Steve Martin is hilarious as the aliens leader and Jennifer Lopez got paid for a day to record lines. The cinematography, as stated, is gorgeous and gives some realistic, good looking eye candy that you and your kids can gobble up. The pace of the film does kind of drag for in the middle, but that’s not a knock, as I think it’s a very entertaining film. What surprised me was the message. Most animated films will have a message so children can learn them and be better in their lives. This one really focuses on the importance of friends and family and how, you may feel alone, but there is always a home to go to. This is one of DreamWorks best and I had a huge smile on my face when I walked out. 8.5/10
(Review by Chase Lee)