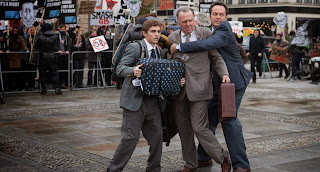 After I got done watching The Internship, I realized Vince Vaughn hasn’t really made a good movie since Wedding Crashers. I still like the guy and I love movies like Swingers and Old School. Is Unfinished Business his comeback to form? No, but it’s a hell of a lot better than The Internship. There were two main problems I had with this movie. First, the tones were all over the place, jarring and didn’t really make sense when it was blended all together. Second, there was anti-bullying all over this thing and it didn’t fit. I hate bullies and I wish some of them could get hit by a truck, but I just thought it was being hit across our faces in an annoying and obvious way. It’s also awkward when your movie tries to be a hardcore raunchy comedy. Ken Scott directed this confusing film and he recently brought us Delivery Man also starring Vince Vaughn. Delivery Man was a remake of Starbuck, which Scott also directed. The reason why I bring this up is because Delivery Man was the same in the sense that it was PG-13 humor with dramatic elements. Unfinished Business tries this formula and mixes raunchy humor with dramatic elements. Maybe it should be a Raunch-edy, perhaps? It just didn’t glue well at all. Either go all raunch or go all drama. You can mix comedy and drama well, but mixing frat boy humor with it and switching back and forth from it to drama is disjointing and kind of takes you out of the movie. The three leads are good in their roles and have good chemistry as they start a business together; and it’s always nice to hear Tom Wilkinson say, “titty”. Vince Vaughn is his usual self and Dave Franco was odd. His character was odd, yes, but once you find out who his character is, it’s kind of awkward to laugh at him. The supporting cast is unforgettable and Nick Frost has done some weird roles, but this one was weird, even for him. The cinematography is fluid, nice and provides good eye candy as they travel to Europe. The film is an hour and a half and it kind of drags a bit in the middle. The weird thing is that the whole movie feels like it was the third act ripped from another Vince Vaughn comedy and stretched to make a separate movie. Overall, this was a tonally confused movie, nothing meshed well, the comedy was OK with some laugh-out-loud moments and it was awkward to laugh at Franco’s character. I still have faith in Vaughn and every project he does, but this one was a misfire and could have been something good. I can’t get it to a fresh rating. 5/10…matinee if you are bored.
(Review by Chase Lee)