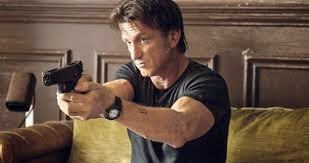 At 54 years of age, Sean Penn looks mighty fine. His craggy features speak of experience and his buff body shows determination. Considering his last movies were in 2013, The Secret Life of Walter Mitty and Gangster Squad, it's good to see him back on the big screen. He is also listed as one of the producers in this geopolitical thriller directed by Pierre Morel (Taken) and written by Don Macpherson and Pete Travis. The story is taken from the novel The Prone Gunman by Jean-Patrick Manchette. It's not hard to believe Penn as a special forces mercenary taking out the bad guys, adding his name to the list of geri-action movie actors.

The movie begins with a heavy doses of footage from the atrocities that happened in the Democratic Republic of Congo in 2006. Jim Terrier (Penn) is working for a security team protecting the humanitarian workers, but his real job is working for a company that takes on "wet" assignments from special interest groups. He is assigned to be the shooter by Felix (Javier Bardem) the coordinator between the company and the group. Jim has to do the hit and immediately leave the country, leaving behind the love of his life Annie (Jasmine Trinca), a humanitarian relief doctor. Felix just happens to have the hots for her.

Some eight years later, Jim working out some heavy guilt from that last job is now working back in the Congo installing clean water systems. A group of supposed rebels come to the worksite trying to kill him. Jim figures out that the attack may be connected to the hit code named Calvary. He goes back to London and looks up his old team member Cox (Mark Rylance) who now is a suit with the company and promises to look into it. He also enlists the help Stanley (Ray Winstone) who leads him to Felix living in Barcelona. But Jim is also experiencing his own physical problems with PTSD and a bad case of post concussion syndrome giving him horrific headaches.

He meets up with Felix who is freaked out and somewhat guilty for stealing his Annie as his wife. Annie who never stopped loving Jim. The love story is somewhat interrupted by the never ending encounters with the shadowing team of bad guys trying to take out Jim leaving no one in their wake. Penn proves his action hero status with some very inventive fighting sequences in a country home in Spain, an a theme park aquarium and a bull fighting arena. Idris Elba shows up late in the game as an Interpol agent who urges Jim to come clean with accountability.

While the story seems mired in too much political intrigue, Penn does a credible job in the lead. Bardem is sort of wasted as the sleazy former friend who stole someone's woman so he drinks his guilt away. It's still an interesting movie, just not the best.
(Review by reesa)

Posted by Dallas Movie Screenings at 6:52 AM

Email ThisBlogThis!Share to TwitterShare to FacebookShare to Pinterest
Labels: The Gunman review