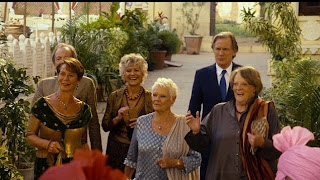 First off it's highly recommended that one sees the first movie The Best Exotic Marigold Hotel if only to understand the characters clearly in this sequel. Both director John Madden and screenwriter Ol Parker are back with the continuing adventures of the group of English retiree's of the hotel. The first film was based on the 2004 novel These Foolish Things by Deborah Moggach. The 2012 comedy drama became a successful sleeper hit of the year. It's refreshing to see a movie that honors the talents of the older cast members showing they can still have romantic and adventurous lives.

At the end of the first movie Mrs. Muriel Donnelly (Maggie Smith) has taken over the management of the hotel in India assisting the young and chipper Sonny Kapoor (Dev Patel). They want to expand on the idea of offering ageing pensioners a chance to live out their lives somewhere beautiful and exotic. They meet with some executives (David Strathaim) of a major retirement industry to help fund their expansion plan. Sonny who is soon to be married to long time girlfriend Suaina (Tina Desal), is manic about creating an empire. His obsession is keeping him from concentrating on his upcoming nuptials. Especially when he is told the company is sending an undercover guy to check out their current facilities.

Every morning Sonny does a role call of the residents to make sure that no one has passed in the night. The group which met in the first movie have settled in their new lives finding jobs to keep them busy and support themselves. Except for Jean (Penelope Wilton) who could not stand India. Her husband Douglas (Bill Nighy) stayed and works as a tour guide being assisted by a young boy who reads his script through an ear piece. He's also sweet on Evelyn (Judi Dench) who embraces the country with open arms working as a textile consultant for a major company. They flit around each other not really ready to commit. Norman (Ronald Pickup) the notorious womanizer has settled with Carol (Diana Hardcastle), but can't help but flirt so she wanders. Madge (Celia Imrie) is keeping company with two men who both want to marry her, but she has her reservations.

Enter into the is mix is Guy Chambers (Richard Gere) who says he's there to write a book. Sonny assumes he's the company spy and kisses his butt taking away the choice room from another new guest Lavina Beach (Tamsin Greig) Chambers has taken a fancy to Sonny's mother (Lilete Dubey). Sonny takes both of them to see his new hotel excitedly telling them his plans, but discovers that his cousin has bought the property and not only that Sonny suspects him of flirting with his fiance.

Because of the large cast and storylines that tries to give equal time to everyone, it can be confusing if you haven't seen the first movie. Dev Patel is more hyper bordering on annoying. The beautiful wedding is seen in all it's colorful glory complete with a Bollywood style dance number. There is so much going on, that when it came time to wrap up the endings seemed rushed. Who knows if they will do another one of these, and who will not answer the roll call.
(Review by reesa)