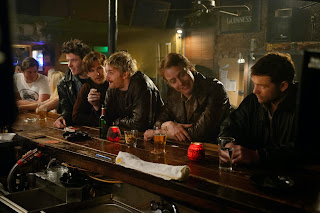 Kidnapping Mr: Heineken is the 2015 film release about the real life event that occurred in the fall of 1983. The wealthy founder of the Heineken brewing empire was abducted in broad daylight by a band of five friends, all of whom were down on their financial luck. Together they financed, through stolen monies, and plotted the caper which would eventually net them the largest ransom payout of all time, close to 20 million dollars. With Amsterdam as the backdrop, the desperate, novice kidnappers initially pull off a bold bank robbery, followed by the requisite chase and eventual getaway. The money taken is used to build secret soundproof holding cells for Alfred Heineken and is nervous and terrified driver while they lie in wait for the millions to arrive, which takes several weeks.

While a moderately interesting retelling (the second on film) there is nothing particularly interesting about this film, despite having Anthony Hopkins in title role. He plays "Freddy'" with the same calm, but hissing intensity as he has a few of his former imprisoned characters. He is terribly underused and just short of three dimensional as he moves from confident captive, to exhausted, confused and emotionally spent mess, back to public and social figure in society.,  He shows Alfred to be a smart, self-made man who does not appear to be afraid of his captors. Quite the contrary,  he makes several demands in line with his position as a rich millionaire who is used to getting what he wants, when he wants it. The five spend the majority of the film plotting, planning and discussing their next step along the way, The boys are well thought out in the beginning, but their nerves and ability of plan and think clearly begins to unravel as time goes on.  Film wise, there is really nothing going on but a basic retelling. The filming is straightforward, the performances unremarkable and while the setting is a decent little exploration of Anne Frank's city, you really wonder if any of these guys are even Dutch, beyond their names, for the don't seem to be and that is distracting. A point of interest was when Alfred tries to play a few mind games with Cor Van Hout (Jim Sturgess) who has the added pressure of a pregnant girlfriend on top of everything.. His brother in law is the second main ringleader, Willem Holleeder (Sam Worthington) who helps to try to keep the others from bailing and becoming paranoid that they are going to get cheated or worse, caught. It's a touch hard to keep the kidnappers and their current moods straight at any one given time but we do feel we are spending too much time trying to figure things out as he days turn to weeks of captivity. Of course they mess things up,  at least a couple of times to try to keep things interesting, but it just really isn't all that much. We have all been around the block regarding basic kidnapping 101.
(Review by Cheryl Wurtz)

Posted by Dallas Movie Screenings at 8:01 AM