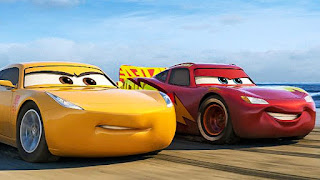 Rev up your engines for the next “Cars” adventure!

Cars 3 is a movie with wonderful comebacks and conflicting turn of events.
Eleven years after the release of the original “Cars,” this is the first comeback since 2011’s “Cars 2” and the first without the involvement of John Lasseter as the director. In this film, the characters were back in the big race again but this time, new racers showed up to the big race for the new generation and in hopes of winning, leaving the old-generating racers wiped out and retire for good. One fateful night, the veteran racer, Lighting McQueen (voiced by Dallas-own Owen Wilson), determines to beat the high-tech racer, Jackson Storm (voiced by Armie Hammer), but deliberately cause a terrible crash, sending his career down to retirement. He later request assistance from his friends and his new mentor, Cruz Ramirez (voiced by Cristela Alonzo), in order to get himself back on top. I found very intrigued to see how the relationship with racing goes between Lighting McQueen and Cruz. This film was extremely emotional as this film mentioned many events from the first film, including Doc Hudson (aka the Fabulous Hudson Hornet). The Doc Hudson character was an important part of the film to discover the great values of wisdom, faith, and friendship for generations. On the other hand, Doc Hudson was the true mentor to McQueen’s racing life.

This film was great and emotional as Pixar made several improvements to this one than the second film, which was Pixar’s worst production and completely ignored by audiences. The really loved the experiences the director, Brian Fee, have brought the Cars fans to explain the unique story line centering around Doc Hudson as an important role as a McQueen’s instincts to help him beat the high-tech racers. The writing and the direction is properly stable with great balance and great pace for the characters and the plot. The background music, comedy and drama are wonderful and nostalgia. I did like the usage of NASCAR drivers as cameos. However, I didn’t like how this film lacks the charm as there were missing pieces to the film that didn’t reach that height to the original.

Overall, Cars 3 was an astonishing sequel and was considered to be the best “Cars” film in the series. Pixar done a great job at storytelling. Like “Cars,” this film would never disappoint you to see how his racing career affects the future. I would watch this again and the first film, rather than sticking with “Cars 2,” but you have the option to watch the first film, second film, or both before watching this. I would go with this film as if “three is better than two,” referring to the sequels. It was the worth the trip of your life.

As a bonus, there was a Pixar short called “Lou” about a mysterious lost-and-found monster named Lou who wanted to teach the bully a lesson after he destroyed the children’s toys. The short film was wonderful, funny, and interesting with a rare story line like the previous Pixar shorts. It was a great presentation before Cars 3. This short and Cars 3 would be a perfect treat for Father’s Day weekend.