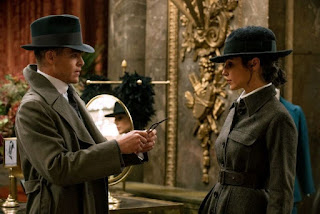 Gal Gadot is full of Wonder!

FLASH! BANG! WALLOP! After encountering with Batman and Superman from the darkest battle upon the city. Gadot’s sexy character, Diane Prince/Wonder Woman, has her own move on her discovery on the men-less island of strong, rebellious females called Themyscira, where she fights and battles several Amazonian women on the island while learning the values of truth and justice. Later, a male survivor named Steve Trevor (portrayed by Chris Pine), who washed up ashore and took his spying job too well during his period of World War I in the early 20th century against the Nazis, agreed to take Diane Prince to a journey in London to stop the war and save others from danger. If Gadot knew the tricks like Mrs. Incredible/Elastigirl, then she would fight easily while Chris Pine’s character knew the discovery of the most powerful weapon: poison gas, developed by Dr. Poison (Elena Anaya) and General Ludendorff (Danny Hutson).

The film was very good that none of the films of the DC Extended Universe (DCEU) could ever trigger that enormous level. I admired Patty Jenkins direction, its origin story, the performances from Gadot and Chris Pine, the usage of special effects, costume displays, and the settings of this film in London and in a different island. I laughed at Trevor’s words about him being with Diana, but eventually Trevor was a great character to keep company with Diane Prince as she was willing to take down her enemies herself to bring a peace and justice to humanity. I found it very interesting to see the two having a romantic interest to each other, which was believed to be funny, but strongly emotional. The good thing is Gadot provided a similar performance from Pixar’s “Brave” and “The Incredibles.”

However, I do have two things I’m not impressed in this film. First, the time-setting is different as the island looked more like present-time compared to the 1920’s style (aka the Roaring Twenties) back in London scenes. There was no word about transporting from the wonderful island to the World War event in London. The second was the beginning when there’s only one child (portrayed by Emily Carey) on the island and not many more.

Overall, the film was an amazing masterpiece for the first time in DC history as this one did much more improvements than the previous DC films. It’s the 2 ½ hour delightful treat for the fans of Wonder Woman and DC Comics. I prefer watching this again and “The LEGO Batman Movie” rather than sticking with “Batman v Superman: Dawn of Justice.”