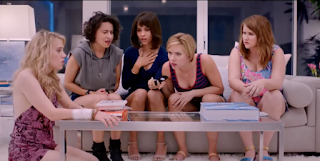 This concept has been done before, but with a group of men, titled “Very Bad Things,” (1998) the directorial debut of actor Peter Berg (“Christine,” “The Great White Hype”), who looked at a group of friends and their exploits involving a bachelor party gone awry.

With “Rough Night” the focus here is the female side of things involving Scarlett Johansen and her troupe of friends and confidants and the mishaps that occur after Alice (Jillian Bell) accidentally kills a stripper. This entry is the blackest of black comedies, but filled with the right amount of sardonic humor as well as juvenile jokes. The ‘R’ rating here is earned and justified.

“Rough Night” is a mixture of hodgepodge of ideas that might have looked good on the page, but when executed are like somebody spliced them together with garden shears and Scotch tape.

The leads in Zoë Kravitz’s Blair and Ilana Glazer’s Frankie create the right chemistry and composure, but something is absent in the end. Although the pair were together in the college days, each has since moved on with their lives, taking completely different paths. Blair is actually going through a divorce while Frankie is only dealing with her usual array of protests and the like.

What is kind of odd to see in a movie like this is Demi Moore and Ty Burrell. Each has had success in different parts of their career with Moore the most startling, since she once commanded millions of dollars just to have her name on the marquee.

Burrell is best known as one of the patriarchs on TV’s “Modern Family, a show still popular with most of middle America.

The plot twists here are not in abundance here, but used with just the right degree of severity and humor. I laughed in all the right spots, because it was just made for sheer stupid enjoyment. I think Johanssen did this as a way to steer away from her superhero role and just let loose in a silly comedy.

“Rough Night” is a harmless puff piece that is not worth a first run seat at the table, rather one that can be seen at a later time when
Be warned, this one is just like a Marvel comics based entry where one has to stay for the ultimate pay off, since is a nice little zinger. Too bad the movie could not have been better.
Grade: C+
(Review by Ricky Miller)