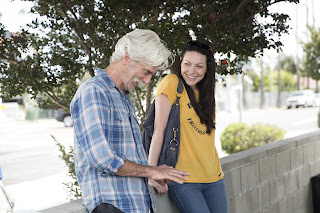 Sam Elliot is famously known for this low gravelly voice, bushy mustache and his stoic western movie roles. In director Brett Haley's new film which he wrote with Matt Basch, The Hero, Elliot plays a character that is basically him. Haley and Elliott worked together in I'll See You In My Dreams which was the opening night film of the 2015 Dallas International Film Festival. The Hero premiered at the 2017 Sundance Film Festival in January.

Elliot plays Lee Hayden whose career is waning having peaked in the 70's and 80's. He is now using his voice to shill BBQ sauce. His agent doesn't have anything for him, but the Western Appreciation and Preservation Group wants to give him a lifetime achievement award. That sort of makes him ponder if this is all that is left for him. On top of that his doctor gives him some bad news. Lee spends most of his time getting high with his friend Jeremy (Nick Offerman), who he met while doing a western TV show way back when. Nick introduces him to his stand up comic friend Charlotte (Laura Prepon).

Lee dreams of his best role, The Hero, which he interprets to mean that he's going to get a new project soon. He goes to see his ex-wife Val (Katharine Ross), who he tells that he's going to be working again, instead of telling her about the cancer. Val encourages him to see his daughter Lucy (Krysten Ritter), with whom he has a contentious relationship. When they finally connect, he asks her to come to the honor event, but she is busy, so he makes plans to have dinner with her.

Lee ends up asking Charlotte after flirting with her at a taco truck. She gives him some molly in the limousine on the way to the dinner since Lee seems kind of depressed. Of course his altered mood makes him a hit at the event. In fact, his very humble speech ends up giving his award to a member of the audience. Of course it goes viral afterwards getting 2 million hits in 2 hours. His agent is calling with lots of work being offered.

Elliot is perfect in the role as the pot smoking and often dour actor who stuck in wondering if a walk in the ocean may be the solution for a dead career and the looming expiration of his health. His relationship with the younger Charlotte is confusing to him, but she encourages him to come clean to his ex-wife and daughter who says he just can't go and die on good terms. Haley and Basch's script is a bit overly sentimental and slow. There are gaps in character development that makes one wonder why Lee hangs out by himself in his nice house, drinking and getting high. His self involvement with his perceived legacy of only being known for his best known movie, The Hero, makes one want to tell him to snap out of it. Outside of that, it's an excellent performance by Elliot and supporting cast, making it a nice afternoon flick with a dinner afterwards.
(Review by reesa)

Email ThisBlogThis!Share to TwitterShare to FacebookShare to Pinterest
Labels: The Hero review