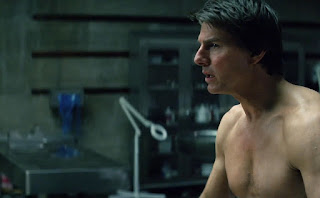 The general public does not know this, but Universal Pictures has been trying to get their own niche in the horror genre. They have tried a couple of times over the past couple of years with the Brendan Fraser-led “Mummy” movies as well as “The Wolfman” with the star power of Benicio Del Toro and Oscar-winner Anthony Hopkins and 2014’s “Dracula Untold” with Luke Evans.

Now, with Director Alex Kurtzman’s “The Mummy,” Universal Pictures are trying to put a brand and stamp on their own niche in the genre, titling their division Universal Dark Universe. Kurtzman is usually just sitting in the producing chair, having worked in various capacities with “The Transformers” movies as well as Spider-Man and the “Star Trek” universe.

They have a built in audience with the star power of Tom Cruise as well as Oscar winner Russell Crowe (“Gladiator,” “A Beautiful Mind”). Crowe plays Dr. Henry Jekyll and Mr. Hyde. His appearance plays into the monster tapestries wherein Universal's all new Dark Universe is heading.
His character is supposed to have a stand alone tale in the near future.

The plot in Kurtzman’s “The Mummy” deals with the first female led tale “Mummy” tale in which Sophia Boutella’s Ahmanet wants to take over the world entire.

Boutella might seem like a familiar face, and she is having supported in “The Kingsman: The Secret Service” as the woman with deadly scissor legs in 2014 as well as 2016’s “Star Trek Beyond.” In that one, she was a white painted alien named Jaylah, who might appear in the next entry a couple of years down the line.

A lot of people have said this was the worst Tom Cruise movie ever, but he’s done worse, namely 1983’s teen rom-com “Losin’ It” and 1988’s slice-of-life drama the boring “Cocktail.” More recently, he was the lead Stacee Jaxx in the annoying musical “Rock of Ages” in 2012.
Entertaining was the appearance of Jake Johnson’s Chris Vail, who pops up in various stages of decomposition interacting with Cruise’s Nick Morton. It is kind of a throwback to John Landis’ “An American Werewolf in London” wherein a rotting Griffin Dunne interacts with David Naughton’s character, the werewolf who bit him.

Also thrown in for good measure are references to the past “Mummy” films in which the audience glances at one of the unlocked books used to send one of the villains back to the underworld.

Of note is the rumor Johnny Depp will be in an update of “The Invisible Man” in 2020. Also mentioned is Angelina Jolie as “The Bride of Frankenstein” and Dwayne Johnson as “The Wolfman.”

The movie is a fun ride, albeit the hokey feel of the past Stephen Sommers “Mummy” flicks.