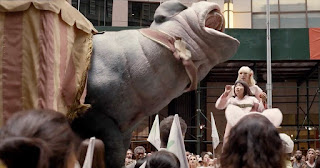 Okja, the title character is a superpig. What's a superpig? It's one of 27 creatures that are being sent to farms all over the world, to be raised on farms. In the hopes of raising the one supreme superpig. Corporation Mirando, led by CEO Lucy Mirando (Tilda Swinton) in an way far out there role (complete with braces) secretly engineered the GMO piggies to solve an impending world food supply crisis, in a mass media roll out. The competition is meant to be a diversion to the world, making them think the superpigs were discovered in South American, when secretly they were artificially created. Lucy feels that the public will not buy GMO foods, thus the public ruse. But Mirando stands to reap millions and millions for their 10'year time investment in the diversion. Their goal is of course market domination. So the show must go on. Okja, the creature onscreen, is an amazing, charming and very engaging CGI creation that is based on a pig, a dog and a manatee. Super lovable.

Okja as a baby was sent to South Korea to a rural mountain farmer, where he has grown fat on local fruit, swum in mountain pools, frolicked in the forest and formed a close relationship with young Mija, the grand daughter, who loves Okja deeply and completely. It is discovered, when company spokesman Johnny, a wacky and dramatic, over the top, yet failing animal-planet type TV host ( Jake Gyllenhall) shows up with his crew to examine Okja and declare him competition worthy. As grandfather explains to Mija that Okja is going to New York for his big reveal, Mirando employees and Johnny take Okja to board transport for the US.

Corporate Mirando realizes that the very public vigilante theft and subsequent loss, again, of Okja back into Mirando hands, is bad PR news, and Lucy decides to recruit and bring Mija along for the public reveal. It remains the goal of the animal rescue organization to free Okja and expose Lucy for the fake and liar that she is.

The film is full of hilarity, drama, visual appeal and a fair amount of four letter F -words. Quite a lot for an unrated movie that anticipates a PG-13. There is enough action and adventure for everyone. Wonderful special effects. Amusing stunts and twists and turns. Many images are visually stunning, coupled with a unique and quite lively score. There are dramatic and thrilling Okja chases in Korea, and underground mall, in New York City and at the superpig farm, where the horrors of the meat packing industry are laid bare. Many moments are heart wrenching and emotionally touching. The film, which debuted at Cannes and will be on Netflix the end of June, is truly an original, inspiring a broad range of emotions, about relationships, family, working for a worthy cause and the very timely themes of reducing violence in the meat industry, treating all animals humanely, the development and use of GMO products and an openness between corporations and consumers. Fair warning, some scenes at the factory, may be intense for young viewers, for they involve forced breeding, sac-ing, and meat processing, factory mass produced style. The other more pleasant idyllic scenes will imprint not unlike most Classic Disney films do.
(Review by Cheryl Wurtz)

Posted by Dallas Movie Screenings at 4:51 AM