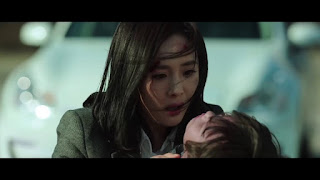 RESET
*** (out of ****)
Reset is a relentless thriller that takes great care to use its time-bending storytelling gimmick with an accompanying sense of neat, internal logic. It’s also surprisingly effective as the story of a mother who will go to any length to protect her child, and then it pulls the rug out from under its audience’s comfortable perception of that story. The catalyst for that shift isn’t a twist, although there is one here – a development that is almost immediately disposed of, as if screenwriter Cha Muchun understood how trivial it was in the bigger picture and moved forward from it.

That means that the screenwriter is constantly one step (at least) ahead of the audience always, and that unstoppable sense of forward motion in a plot that doesn’t break for the easily exhausted is welcome, especially considering the film’s rough start. The opening half-hour of Cha’s screenplay frontloads a lot of information about the inner workings of a time machine that winds up being pretty incidental to what Cha and director Chang have up their sleeves. It requires some care on the part of a film critic to reveal plot information that might be of vital importance in this case. A general premise works better.

The film concerns the phenomenon of time travel as ushered forth by Tian Xia (Yang Mi), a scientist whose efforts have gotten her company to the point of being able to travel backward in time by one hour and fifty minutes. The brevity of that travel is important going forward, because no sooner is she on her way home after work than her son is kidnapped and the perpetrators are demanding that she hand over the materials used in developing the machine. This is all that should be comfortably revealed about a narrative that eventually folds in upon itself.

And it does take about half an hour, built upon explanation of the properties of that machine (which are mostly confounding, at least until we see them in action), for the film to find its footing. Once it does, though, in a sequence that establishes Tian’s desperation in an incredibly complex situation, the following hour is surprisingly ruthless in its depiction of the villains, who do not pause to consider the collateral damage, and nifty in the way Tian confronts the very physical ramifications of her creation. Yang’s performance, which forks off into three, very different directions because of that creation, is exceptional.

The film is also home to a series of impressive action sequences, including a wild chase down a series of highways (Some of the cheaply-produced special effects do get in the way, although Chang offsets that limitation well by not truly relying on them) and an equally nervy climactic shootout. Within that shootout, though, Cha and Chang’s final card is played, twisting the minor expectations built-up that define our relationship to a certain character into a kind of origami fold of a screenplay. Whether Reset plays fair is in the eye of the beholder. You know who you are.
(Review by Joel Copling)