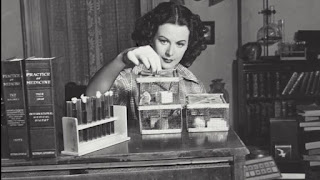 The world's most beautiful woman was also the secret inventor of secure wifi, bluetooth and GPS communications, but her arresting looks stood in the way of her being given the credit she deserved... until now.

Hedwig Eva Maria Kiesler was born in Vienna in 1914. Her mother wanted a son, but her father, a bank director, would often take out his bright young daughter on walks and explain to her curious mind how things like electricity and engineering work. Her parents were assimilated Jews who were well to do and send Hedy to private schools, and exposed her to the theater and operas. She went to Berlin to do stage work, then later returning to Vienna to work in movies where she earned a notoriety in Gustav Machatý's film, Ecstasy (Ekstase in German, Extase in Czech). It was considered an art film in Europe, but in the U.S. it was considered basically soft porn. The reputation of this movie followed her in her later career.

Hedy's first marriage was to a munitions tycoon who started to do business with the Nazi's. She was a trophy wife who had beautiful clothes, jewelry, and mansions. At one point they entertained Mussolini. She managed to escape the marriage by using a maid to double for her, while she dressed as a maid with her jewels sewn in her coat, bicycled away from that life, making her way to Paris. There she met Louis B. Mayer who was scouting for talent in Europe. He had her change her name to Hedy Lamarr in 1938 bringing her to Hollywood as the most beautiful woman in the world. She gained fame in Algiers (1938), opposite Charles Boyer. Soon every starlet was mimicking her hairstyle and makeup.

Marriages, affairs and children followed her uneven career, but no one knew the real Hedy Lamarr whose passion was inventing things. She had an affair with Howard Hughes who encouraged her "tinkering", even giving her access to his science engineers. Hedy contributed the wing design to Howard Hughes aircraft that he was trying to make faster. During the war, Hedy wanted to contribute something besides selling war bonds. With the help of composer George Antheil, who used his expertise of player pianos to develop a way of radio controlling torpedoes for better accuracy.

The tech was called frequency hopping. They got a patent, and tried to pass it to the Navy, which didn't understand it and filed it away as top secret. It wasn't until the Cuban Missile Crisis, when the tech was finally used. After the patent expiration date, so Lamarr received any financial gain. Today her idea is the basis for Wifi and Bluetooth, and used in rocket ships.

After the 40's, Hedy's film career was less prolific. Being considered the most beautiful woman in the world, getting older was taking it's toll. She resorted to plastic surgery to keep herself looking young. A process she contributed to by suggesting making the surgery scars in areas that would not show which doctors continue to this day. Except she went too far in her constant surgeries and the result was not complimentary. She became a recluse, even to her children.

Hedy really never told her story. She discredited the supposed autobiography, Ecstasy and Me, which she claims was not written by her. It wasn't until, documentary director Alexandra Dean contacted Fleming Meeks who had an audio interview he had done for Forbes in the 1990's. Hedy is candid and humorous in recalling the events of her life. She was so beyond the cultural limitations of her time. It was a man's world, and she was too smart for them. The film opens with her quote: "Any girl can look glamorous, all she has to do is stand still and look stupid." Thankfully she didn't just stand still
(Review by reesa)