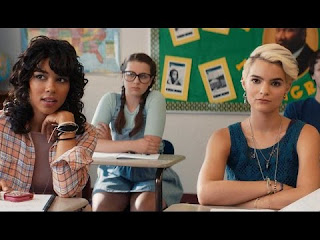 It all Boils Down to Liking the Main Characters. By the Way, They’re Two Serial Killer High School Seniors with a Splash of Narcissism

Rating: R for Strong Bloody Horror Violence, and Language including Some Sexual References

Joel’s Review
*½ (out of ****)
One’s enjoyment of Tragedy Girls will measure in direct proportion to one’s ability to tolerate its pair of protagonists. They are two girls who would be the villains of any other piece but who, according to screenwriters Tyler MacIntyre (who also directed the film) and Chris Lee Hill, adapting an original screenplay of the same name by Justin Olson, are deserving of sympathy as antiheroines here. The set-up to the joke at the center of that screenplay is that McKayla (Alexandra Shipp) and Sadie (Brianna Hildebrand) are fascinated by all things serial killers.

There is, of course, nothing wrong with this particular shared interest. This writer admits to a similar fascination, particularly as it pertains to children even younger than these two committing such atrocities, although he certainly wouldn’t channel that interest in a way that reflects the actions of these young women. That leads us to the punch line of the central joke: The girls have been killing people around town, then using the mysterious disappearances as fodder for their video blog, which shares the name of the movie. It isn’t much of a joke, obviously.

The film opens with their first of such killings, in which some poor high-schooler, who has a crush on one of them, discovers the dangers of having that crush in the form of a machete to the face. Yes, the killings here are, in theory, brutal, though really, they’re just grotesque: The school bully (played by Savannah Jayde) has her head sliced open with a table saw in the school’s craft room and then is dismembered, the pieces of her body placed as a showcase for a traumatized schoolgirl to find the next morning (There is an admittedly amusing moment when the school janitor intrudes upon the dismemberment process, only to pay no mind to anything but his whistling and his work).

The plot, whatever that may be, regards the girls’ activity as their involvement gets closer and closer to public knowledge. That involves the kidnapping and imprisonment of the town’s actual serial killer (played by Kevin Durand), to whom they show affection even while applying a Taser to his neck and torturing him for the fun of it. The wrench in the works is Sadie’s developing crush on Jordan (Jack Quaid), the son of the town sheriff (played by Timothy V. Murphy), whose tragic past unexpectedly ties in the current goings-on. A rift between McKayla and Sadie settles in when the latter saves someone’s life and turns the tide of their video blog away from sadism and death.

The film’s emotional core, if it even has one, is twisted further into something repellant by a sudden turn toward demented moralizing in the final twenty minutes. The girls certainly achieve the fame for which they created their video blog, but they’ve forfeited their soul in the process (The bit of context we gain into a past that informs this present only makes it worse, given the acts of cruelty that follow and undermine it). Tragedy Girls is an ugly movie, featuring performances from Shipp and Hildebrand that certainly commit the characters’ depravity. That we catch a glimpse of Edmund Kemper among the collage of admired serial killers says everything we need to know, really.
(Review by Joel Copling)