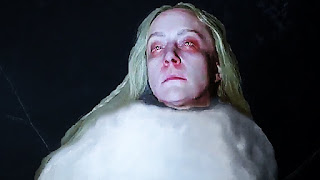 Reel Time with Joel and Chase
The Snow Melted as Soon as the Movie Began.

The Snowman is a hollow mystery – pointless and cruel. It begins with the pieces of the central puzzle, and though it ends with the completion of that puzzle, there is a sense of anticlimax. It is as if director Tomas Alfredson and screenwriters Peter Straughan, Hossein Amini, and Søren Sveistrup (adapting the novel by Jo Nesbø) want to convey a sense that the film’s puzzle is less important than what the film is attempting to say about its characters. That, though, can only work if the film seems to be saying anything about its characters.

Here, the characters, including the protagonist, are pawns in the game of a serial killer who seems to be targeting women of whom he disapproves. The method is uselessly brutal: He injects them with a sedative, then removes their head while they are alive (the better to capture the look of fatal surprise on their faces, one guesses). He also builds a snowman somewhere near the site, attacking only when the precipitation is falling in deep winter. He then builds another snowman, this time without its head, onsite, and you can guess what replaces the fake head (He also reverses this action for the missing heads of the victims).

The case falls into the laps of Inspectors Katrine Brett (Rebecca Ferguson), a recent hire onto the investigative team in wintry Oslo, Norway, who answers the call of a missing-persons report that will eventually spiral into this case, and Harry Hole (Michael Fassbender), whose unfortunate pun of a name is said just enough to be absurd but not quite enough to be amusing. Katrine is also cultivating a case involving a city official (played by J.K. Simmons) preparing the city for the upcoming World Cup. She suspects him of something-or-other that is definitely illegal. Whatever it is involves the objectification of young women, though the screenplay doesn’t focus enough on it to clarify anything (a common problem, believe you me).

Harry is simply happy to receive the distraction from his hellish home life, which includes the estrangement of the son (played by Michael Yates) whom his wife (played by Charlotte Gainsbourg) had in a previous relationship with a man whose identity, much to the inconsequential importance of the narrative, is never known. She’s now dating a hormone specialist (played by Jonas Karlsson). Anyway, the case consists of red herring after red herring, from the rambling uselessness of the stuff with the city official to a handful of flashback sequences involving the first investigator (played by Val Kilmer, whose recent health troubles have rendered the actor unable to speak, resulting in an awkward and obvious dubbing of another actor’s voice in the place of his own while he mouths dialogue) to look into the gruesome crimes.

Most of this plot means nothing when the identity of the killer, which is blatantly obvious based on his unassuming nature and the way Alfredson and cinematographer Dion Beebe (unable to breathe much life into the setting beyond a few attractive establishing shots) constantly frame his profile to be the definition of sinister, is revealed. The motivation is a mostly generic kind of madness, and Thelma Schoonmaker’s jigsaw editing and the imprecise performances, all of which are by actors who seem to be half-awake, don’t help matters. The Snowman is barely watchable – a disaster from the ground up.
(Review by Joel Copling)