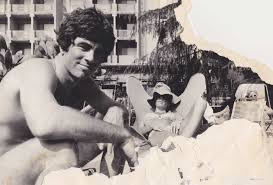 Escapes blazes a wild path through mid-20th-century Hollywood via the experiences of Hampton Fancher – flamenco dancer, actor, and the unlikely producer and screenwriter of the landmark sci-fi classic Blade Runner.

ESCAPES
** (out of ****)
Hampton Fancher has had a life worth talking about. The man talks and talks in director Michael Almereyda’s documentary, and when he’s done talking, he talks a bit more. He certainly addresses a rich life of accidental successes and close calls with failure, but the specifics of a life are less important than the anecdotal evidence of one in Escapes, a mostly autobiographical account of Fancher’s life, from his unlikely early career as a flamenco dancer to his current fame as the screenwriter of 1982’s Blade Runner and the co-screenwriter of the film’s upcoming sequel/spin-off Blade Runner 2049. We get a glimpse at the method Almereyda will use in the prologue of the film.

Fancher, narrating most of the points of his life, begins with a rambling story involving himself, a girl, a sum of money, and some sort of hotheaded bigshot who wants it. Words are exchanged, violence is threatened, and there’s some business involving a planned duel between them. The point is lost in the story’s rambling nature. Fancher simply wants to tell the story, and that seems to be the director’s modus operandi for the duration of the documentary. Almereyda lets the man talk for a good eighty minutes of the film’s 89. The specific points of his life are kept to intertitles consisting of broken grammar and sentence fragments.

The simplest explanation is that the director has no patience for biographizing Fancher’s life, and the more complex one is that Fancher doesn’t want us to dwell. That’s clear during the telling of one story, whose point, again, is lost in the rambling nature of it, that ends with a whimper when it reflects poorly upon the man, who refuses to conclude it. It’s a specific type of evasive maneuvering that’s being done in the structure of the documentary, which pairs Fancher’s words with film clips from his early days of being an actor with some degree of popularity. That was mostly because he’d appear in anything and everything during the late 1950s and early 1960s.

Almereyda shows us very few of the film titles in question. That it would take a bit of research to learn about Fancher’s involvement with the films and television series in which he appeared is another kind of problem tied to the film’s lack of biographical insight. Instead, we get a long-winded reminiscence about Brian Kelly, star of the classic TV show “Flipper,” whose later paralysis in his leg and arm led to some guilt within Fancher: It was his motorcycle on which Kelly was riding, after all. The anecdote means well, but the point of it is elusive.

We’re getting the sense of a man here without the context of his shortcomings as a person. We hear details of two marriages – the second one to Sue Lyon, star of Stanley Kubrick’s Lolita – ending in divorce but gain little or no information regarding what went wrong in both cases. His friendship with Barbara Hershey, which was always on the verge of something more, leads to his motivation when approached to adapt Philip K. Dick’s Do Androids Dream of Electric Sheep? for Robert Mulligan and, later, Ridley Scott. The film picks up a bit when discussing the hardships of that adaptation, which was quite liberal in comparison to the novel on which it was based. By then, though, Escapes only really makes the point that Hampton Fancher is an interesting guy. If one doubts this, one must only ask the man himself.
(Review by Joel Copling)