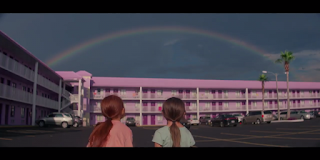 Reel Time with Joel and Chase
A Wonderful View from a Child’s Eyes and the Harsh Reality Through an Adults. Also, It Just Happens to Have One of the Best Child Performances. Period.

It would be going the easy route for The Florida Project to wallow in the despair that exists at the edges of the frame, but co-writer/director Sean Baker is smarter than that. This is a film about childhood that happens to have a backdrop of deepest poverty. The residents of the “purple place,” as it is known to the children, have made the hotel (which is actually called the Magic Castle and rests roughly a hundred meters from a certain entertainment complex in Orlando) a kind of settlement. It’s a den for the underprivileged, but this is all our young heroine knows in life. The “purple place” might as well be her entire world. What does it matter that this is no place for her to grow up?

Bobby (Willem Dafoe), the manager, is a kind man with a specific set of rules that he enforces with a firm grip on the shoulder while escorting you off the premises, if necessary. The rate per night becomes weekly rent for those who take up residence in his rooms, and he isn’t afraid to “evict” those whom he does not trust to pay their share. His bond with customers is almost always strictly businesslike, but he has developed, perhaps unbeknownst even to him, a fatherly affection for the children of his customers: His ejection in one, particularly tense scene of a potential sex offender preying on the children is as much a decision for the safety of his residence as it is a movement to protect the kids.

The story, such as it is, follows the adventures had by Moonee (Brooklynn Kimberly Prince) and her friends Scooty (Christopher Rivera), Dicky (Aiden Malik), and, after a game of spitting on her mother’s car, Jancey (Valeria Cotto), who resides in a neighboring hotel. One of the other three eventually moves out, leaving the other two to accompany Moonee through a tour of poverty in the miniaturized bubble of the hotel itself. Moonee’s mother Halley (Bria Vinaite) loses her job as an exotic dancer and enters a life of hustling for the cash that can keep a roof over her head. Eventually, she must bed men to make the cash.

In an astonishing coup, Baker and co-screenwriter Chris Bergoch manage to find the joy in this setting. Perhaps the reason is tied to the film’s perspective, which is that of young Moonee. Everything receives the gloss of a childlike innocence, yet the gravity of these kids’ situation, confronted directly by a climax that also confronts the end of such innocence, is never ignored or evaded. Prince, in her film debut, is a magnificent presence in the kind of turn that should be undone by precociousness but is instead remarkably natural, and Vinaite finds the grey morality in a mother that toes the line between negligence and unconditional love.

Baker, as in his previous film (2015’s endlessly sympathetic and similarly joyous-when-it-could-be-despairing Tangerine), casts familiar faces, like Dafoe (marvelously cast against-type as a man in control of unpredictable elements), Caleb Landry Jones (who appears in a pair of scenes as Bobby’s son), and Macon Blair (as a man from whom Halley steals, then sells, some valuables out of desperation), against the likes of newcomers and, in at least two cases, adult film performers to create a stylized facsimile of reality. The tone is still primarily naturalistic, especially the performances, but Baker’s camera, with the aid of cinematographer Alexis Zabe, takes on a voyeuristic quality. The Florida Project, as a result, moves with the unpredictability of real life.