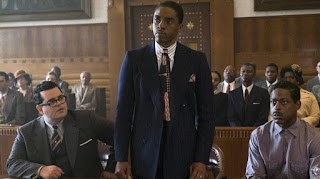 Chadwick Boseman has played some real life heavy weights like baseball legend Jackie Robinson and the infamous James Brown. This time he takes on Thurgood Marshall as a young lawyer with the NAACP fighting cases of racial injustice. This is long before Marshall becomes the first African-American Supreme Court Justice. Directed by Reginald Hudlin and written by Jacob Koskoff, a veteran civil rights lawyer with no previous film credits, and his screenwriter son Jacob, this movie focuses on one of an early case of his career.

Boseman plays Marshall as an idealistic young trial lawyer from Baltimore who in the 1940 is sent to Connecticut to defend Joseph Spell (Sterling K. Brown) a black chauffeur who stands accused of the rape and attempted murder of his white employer Eleanor Strubing (Kate Hudson). As an attorney with an out of state license he must find a local lawyer who will sponsor his standings. Enter Sam Friedman (Josh Gad), a Jewish insurance lawyer who was recommended by his brother. The Judge (James Cromwell), doesn't appreciate some young upstart to politicize his court. He orders Sam to be the lawyer of record, and Marshall can sit at the table and not say a word. Sam does not specialize in criminal cases and fights back at every turn as Marshall schools him on what to say and how to proceed. Not much is told about Marshall, whose self righteous hubris is declaring he only defends innocent people. He's cocky and confident while reining the reluctant Sam to maneuver and question the jury selection. Trying to find a fair minded all white jury in Connecticut is the least of his worries. What is more challenging is the victim and accused may not be telling the whole truth.

The story follows a small part of Marshall's life with his suffering wife who suffers a miscarriage without her husband around due to his constant traveling. Marshall also pals with Langston Hughes. As for Sam, he and his wife worry about the relatives back in Germany with the rise of Hitler and his extermination of the Jews. Their similar racial struggles ultimately unite them and opens Sam to defending more civil rights issues. Had this been a movie about anyone else, it would have fared like any other mystery of the week as the truth of the case is revealed. But because it's Thurgood Marshall, it gives it some credibility, but doesn't really tell much of who he was or who he was to become.
(Review by reesa)