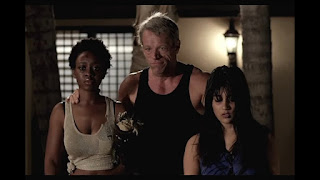 This intense and extremely gripping film tells the story of three girls who get abducted and thrown into the horrifying world of sex slavery. The film didn’t hold back any realism from what it was depicting as its subject. Sara, an 18 year old that has just aged out of foster care, is taken to what she thinks will be a new job. Instead, she is betrayed by a woman she trusted and is taken to a sex house in Texas to be a slave of human trafficking. Amba, an Indian young woman about to go to MIT, is out at a party and is then kidnapped to be put in the trade. Mali, a Nigerian young woman who was separated from her family, has gone all over the world for her body to be used.

This was a phenomenal masterpiece that portrayed the real horrors that the women who are trapped in this world have to experience every day. There was no pull back in the depiction of the rape of these women and the violence that they are subjected to. There were multiple scenes where the men who ran the house punched, beat, and chocked them on screen to further communicate the criminal gravity of the acts. Just to think that these girls were going into the next phase of their lives and that they had great plans for themselves was unsettling to think about. The idea of the ease of being kidnapped and just falling into this system was extremely frightening to recognize.

There is a beginning scene of the film where men are pushing women along in a line. We, as an audience, get to comprehend the disregard for the women that exists in this world and these men’s minds. This film did a great job in having the audience realize the severity of this organized criminal activity. There’s another scene where a girl runs away because she can’t bear to realize what is going on and gets shot in the back. This was a chilling portrayal that forced the audience to realize that this actually does exist.

With the story of the girls being in the Texas sex house, there was also a wonderful story about the friendship that Sara, Amba, and Mali make. They are each other’s source of strength and hope. They experience this sadistic violation of human rights together with the only light being there in each of them. This project is a highly impactful story that makes a thorough footprint and that convinces the public to take immense action.
(Review by Wyatt Head)

Posted by Dallas Movie Screenings at 8:58 AM