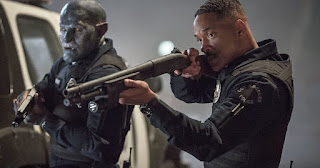 I am a sucker for 2 things: buddy-buddy movies and romantic comedies. “Bright,” a movie made specifically for NetFlix, falls into the former.
With David Ayers new entry, “Bright,” it is Oscar-nominated Will Smith (“Ali”) who stars alongside Oscar nominee Joel Edgerton ’s (“Loving”) Nick Jakoby, a fellow officer in blue.

Smith’s Daryn Ward is a family man who has to deal with an annoying flying fairy who essentially invades the bird feeder on their front lawn. “Bright” does not have a date, but is set on the near future where orcs are a commonplace occurrence.

What is cool about the movie is the verbiage and references that abound in this fun fantasy flick. The main deal centers on a magic wand, that essentially gives the owners a chance to change one’s life in an instant.

The fantasy elements are just written in as a reference point to all the shenanigans that occur. It is a bit lengthy, clocking in at 157 minutes but once you are watching it, it just flows.

This one is also just a violent shoot ‘em up, even more so than either Michael Mann’s brilliant 1995 “Heat,” wherein an action sequence is played out as a strategic chess game.

A more recent film comes to mind with 2007’s “Shoot ‘Em Up,” a Clive Owen-led actioner that takes ludicrous action scenes to the point of sheer ridiculousness.

Also integral to the story is the appearance of Noomi Rapace, who was the lead in the Swedish original “Girl With the Dragon Tattoo” trilogy as well as “Prometheus.” In “Bright,” she is a malevolent witch know as Leilan, who just wants the wand to raise an evil spirit back from the dead.

Director Ayers knows how to keep the pace and momentum going for the entire picture. Like his ultra violet entries “Fury,” “End of Watch” as well as the disappointing “Suicide Squad,” he knows how to tell a compelling story. The characters all have a healthy resolve by movie’s end.

This mismatched human-alien dynamic was done before with 1988’s “Alien Nation,” wherein James Caan was an L.A. detective partnered with Newcomer Mandy Patinkin’s Sam Francisco. It was not a great movie by any accounts, since I gave it a so-so grade of a C+ when I originally saw it.

“Bright,” to me was just a sheer enjoyment to watch. I’ve noticed other outlets have dismissed this one as sheer garbage, but I am not like most critics.

It did what it was supposed to do and provide viewers with just an escape from the ordinary, monotonous and mundane.
I recently found out that a sequel has already been approved by NetFlix, so that is something to look forward to a couple of years down the line.