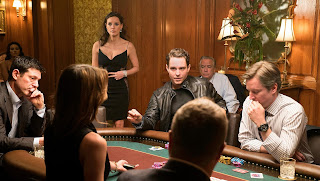 As the Movie Progressed, This Game Kept Striking Out.

Apparently, Molly Bloom almost had a degree in Astronomy without realizing that she had enrolled in the program. This is a detail we learn late in Molly’s Game about the woman whose sole, defining characteristic – at least, according to the screenplay by Aaron Sorkin (also making a surprisingly inauspicious directorial debut) – is the fact that she led a series of underground poker games featuring the incredibly wealthy (from movie stars to, unfortunately for her, members of the Russian mob), was arrested and sentenced lightly, and wrote a book on the subject, which is the source of the screenplay. It’s far from a scholarly analysis of the woman’s obvious vices and virtues.
This film’s version of Molly, played by Jessica Chastain, is guarded about her past and unable or unwilling to be entirely forthcoming about her present. That means that, to Sorkin’s discredit, any insight into Molly’s childhood is vague and any context that the present might provide is immediately questionable. We only see her father Larry (Kevin Costner) through her eyes, which means that his gruff demeanor and lessons of self-preservation, while surely masking a tough-love attitude toward his daughter, are also his only defining traits until around the time we learn of Molly’s unintended college degree program.

The film opens at the point where Molly’s story is a step away from becoming public knowledge: with a nasty injury while skiing. It was her father who instilled a love of the sport in her, and Sorkin, by way of his signature dialogue style of literate witticisms, has Molly narrate, step-by-step, her way through some of the motions of a skiing event in which she is competing. The scene is a showboat – ultimately useless to the plot, except as a way to bookend the flashback structure that ensues and to show that Sorkin learned a lot about skiing and the terms that go along with it in order to write dialogue that feels natural (or whatever passes for “natural” with Sorkin).

Perhaps the point, relevant to later points in her story, is that she can take a bit of physical pain, what with the grievous back injury she sustained and the metal plate that was inserted to fix her posture. Whatever the case, Molly narrates the rest of her story for the following 120 minutes, much of which is devoted to activities that, like the elements of skiing, make for some good excuses for Sorkin to write long strings of dialogue or narration about those activities. This is the first semi-biographical film in memory to tell its entire story through narration and, even more obstinately, montages. Certainly, editors Alan Baumgarten, Elliot Graham, and Josh Schaeffer had their work cut out with the mountain of material presented to them.

Then again, the film needed a team of three editors and still ends up being padded out to 140 minutes. The kicker is that it amounts to a vaguely diverting campfire story without an actual ending or anything resembling a conclusion: Molly starts out as a waitress, is suckered into working for a man she calls “Dean Keith” (Jeremy Strong), ends up being the glorified accountant at a series of increasingly illegal poker games run by “Dean,” eventually spearheads her own, attracts the attention of members of the Russian mob (who retaliate in a way only they can), and, in the event that frames the story’s flashback structure, is arrested by the FBI, hiring a lawyer, Charlie Jaffey (Idris Elba), to represent her in court.

We also meet a fair amount of her clients, who include Michael Cera as an ultra-famous actor (It isn’t clear whether Cera is playing himself here, because of the secretive nature of Molly’s perspective, although one suspects the PR would be poor if he was involved in this stuff), Brian d’Arcy James as a player who always loses and needs loans in increasing amounts, Bill Camp as a gambling addict on the last legs of his marriage, and Chris O’Dowd as a player whose greetings all sound to Molly like the titles of bad airplane novels. They don’t really register as important to the story beyond being pawns in Molly’s scheme, and then there’s the pesky knowledge that Molly might be having us on.
The film is certainly flashy, although even Charlotte Bruus Christensen’s crisp cinematography cannot push off the feeling that this is an overblown, made-for-cable movie with some salty language thrown in and a big star at its center. As for Chastain, the performance is serviceable, but the actress’s quieter moments of reflection serve her better than the quick-wit dialogue and bloated narration. The result is that she seems to be a bit lost in a role that remains two-dimensional despite being the subject. Molly’s Game ultimately comes to a point of apparent conclusion, but the payoff is so negligible that the only response that will make any sense is, “So what?”
(Review by Joel Copling)