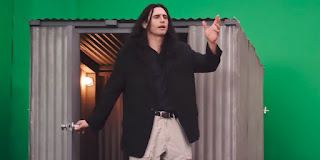 Reel Time with Joel and Chase
It is Bull****, I Do Not Hate This Movie, It is Not a Disaster. It Tis’ Nawwwwwt. Oh, Hi Review.

Title: The Disaster Artist
Rating: R for Language Throughout and Some Sexuality/Nudity
Run Time: Ihr & 43min

“The best thing about all this is that no one’s going to see it.” Of course, hindsight is always 20/20, so the character who says this about the movie whose crew he is part of would probably like to eat his words if asked about them now. He’s the script supervisor on The Room, 2003’s infamously awful romantic melodrama (later marketed as a “quirky black comedy,” though it was anything but) that, following its two-week, awards-qualifying run in Los Angeles, during which it made a small percentage of its budget back, enjoyed cult status because it was so widely reviled – but, in its own way, loved because of that awfulness.

The Disaster Artist, an account of the earlier film’s financing and production, is also about as comprehensive a biopic of its human subject as it could possibly be. Screenwriters Scott Neustadter and Michael H. Weber (adapting a nonfiction account by Greg Sestero, the film’s co-star and line producer, and Tom Bissell) are dealt a curious hand with Tommy Wiseau. He was notably secretive – pooling funds with no stated source to afford the equipment that would be used, speaking in an accent that was naturally cartoonish and vaguely Eastern European while claiming to be from New Orleans, and telling his new best friend Greg (Dave Franco) never to speak about him to anyone while refusing to give a straight answer about anything on display in his apartment (one of two).

James Franco plays Tommy in a remarkable performance, and here there are two major achievements: The impersonation is uncanny, from his drooping eyelid to his slurred speech to the laugh that is always three carefully pronounced syllables, and the externalization as an actor of everything within himself offscreen gets to the evasive heart of the man. Perhaps something within the older Franco brother, who also directed the film, caused him to realize that only he could play this role. He certainly seems to understand the drive had by Wiseau – to be the next Tennessee Williams – that sends him and Greg to L.A. from San Francisco to pursue their dreams of becoming movie stars.

Auditions either go poorly (in Tommy’s case) or dry up (in Greg’s case after he signs on with an agent, played by Sharon Stone, who essentially abandons him). Greg meets Amber (Alison Brie), a bartender with a heart of gold who unintentionally interrupts the curious-to-the-say-the-least friendship between Greg and Tommy, and Greg sparks an idea in the head of his new friend: They should make their own movie. And make one they do, Tommy cobbling together a script that seems to be vaguely autobiographical (but who knows if it is), hiring a cast and crew (including Seth Rogen as the script supervisor, Sandy Schklair, and Paul Scheer as the D.P., Raphael Smadja) and pushing forward with their director, whose dictatorial methods are at constant loggerheads with his underlings.

The fun of the film is certainly in seeing the recreation of many of The Room’s most iconographic moments and more than one of its unintentionally funny narrative gaps by actors with more know-how and, perhaps, dignity than their counterparts: Tommy, naked as whatever day he was born, aims incorrectly during one of the awkwardly staged sex scenes with Juliette Danielle (Ari Graynor), the actress playing “Lisa” to Tommy’s “Johnny.” The inexplicable tone of “Johnny’s” reaction to a story of domestic abuse told by “Mark,” Greg’s character in the movie, is nothing on the hours-long process of capturing a single take involving “Johnny’s” insistence that he himself is not involved in domestic abuse. Carolyn Minott (Jacki Weaver), the actress playing the mother of Juliette’s character, questions an apparently abandoned subplot involving breast cancer, and the answer she receives is unexpected.

There is more where that comes from, and Franco’s approach, while very funny, is delicate enough that we appreciate Wiseau’s drive to create, while put reasonably off by his method to get to that point. The ultimate result of The Room might have been quite awful (Indeed, the story’s crux, that the abusive creep is the tragic hero and his poor fiancée escaping the relationship is the villain, is kind of gross, and that’s apart from the lapses in narrative and imprecise performances), but the greatest coup of The Disaster Artist is that it argues in favor of such ambition. It might have been misplaced, but a movie was made. How many people can say they’ve done such a thing?
(Review by Joel Copling)