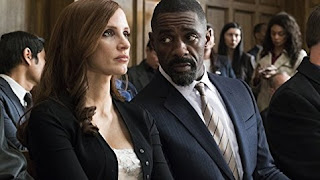 “Molly” wins the poker game!
Not a big fan of casino games nor casino films that would end up in the gutters of losing bets or getting into the high streaks of victory.

Aaron Sorkin made his directorial debut of Molly’s Game based on the book, Molly's Game: From Hollywood's Elite to Wall Street's Billionaire Boys Club, My High-Stakes Adventure in the World of Underground Poker, written by the real author, Molly Bloom.

Oscar-nominated actress Jessica Chastain (The Help) and the director both made a great team (and a winning pair) to develop a sense of style for casino games and gambling games that could throw the celebrities, business titans, and billionaires off. Gives the pain-in-the-butt moment when Chastain’s character produces more and more sophisticated, but highly-intelligent security breach on the gambling hook of the players. Her character was like the eyes-in-the-sky spy to track down who was betting and who was cheating, a direct reference to a style in prison movies for guards to see who escapes from prison.

Looks like Jessica Chastain provide some high-staking roles as a charm, sexy woman who can reached the levels and chances of winning the poker game. Same goes to the actor Michael Cena, portraying his juiciest character, Player X, who loves to tolerate and messing the players all around the table.

In this story, Chastain’s Molly narrates the story about her building up a successful, but illegal gambling role, which had her world turned upside down when she was in debt for huge amounts of money. When endangered from being targeted by FBI, she solely comes the supportive criminal defense attorney (portrayed supportively by Idris Elba), who calls upon the table to defend his long-suffering, sarcastic, but yet loyal client.

This film was good when the story was well-told from the life of Molly Bloom during her great but conflicting life as a secretive money-grabber who makes millions of dollars, even it means getting tips from her own players. “Molly’s” doesn’t stand a chance to go uphill to oversee the men’s luck and greed turning against them. Seems like it was a set-up or trapdoor for her character and maybe other gambling-characters. Really enjoyed the visionary from Sorkin and the character parts from Jessica Chastain, Idris Elba, Michael Cena, and the Oscar winner, Kevin Costner.

However, the Russian mob characters were the biggest issues to be put into a higher risk for the Molly character as if something was about to be soon discover by either them or the FBI agents. It was a harder experience to watch when the betting and beatings have just got real.

Overall, this film is good but somewhat mediocre for anyone who was fan of casino games or films based on people’s pleasures of being part of the games of any kind and subject. No problems and complaints on this. For people liking the board games, maybe you should take a bet on watching this if this film gets into highest chance of winning. In reality, it’s an all-or-nothing event to see if anyone is a winner after the chips were stacked and the dices were rolled.