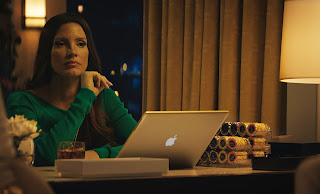 The first statement that I would like to make is that this is the quintessential film that is the primary reason for me engaging in cinematic experiences. It is not even justified to say that this film is of a flabbergasting nature. This is a movie that illustrates a chaotic world where the person in the middle is one of great intellect and mental power.

The story follows Molly Bloom, a brilliant young woman with immense intellect, as she makes her way from highly accomplished skier to a massive leader in the underground poker world. We see from the very beginning scene that her father imposed on her a rigorous and almost alienating persistence for success. We jump into Molly’s shoes right as she is taking a break from her climbing trajectory into her life in LA which subsequently leads her into the world of poker. She works for a horribly mean boss until she runs her own game which leads her into an abyss of riskiness and illegality.

Jessica Chastain gives Molly that extreme quick-wittedness and brilliance that communicates to the audience what type of individual Molly is. She was capable of building a huge poker organization with respect and her desire of not hurting anybody. Her legal battles are spearheaded by the character of Charlie Jaffey, an experienced top lawyer whose early misconception of Molly is transformed into great admiration and respect. The story within the story of their relationship is fantastically displayed with their disagreements and dialogue that clearly communicate their intelligence.

We see how Molly starts from one-upping her former boss with a better high-stakes game to suddenly being involved with the mafia. This notion and realization of the latter becomes extremely tangible in a cringe-worthy scene. It is amazing to think that this Colorado girl about to go to law school becomes the owner of an illegal poker game involved in such messes.

Kevin Costner, who plays Molly’s father, Larry Bloom, is a relentless educated man who strives for nothing and I mean absolutely nothing less than the best from his children. In a few scenes, especially one from Molly’s childhood, this concept is highly understandable and becomes a serious misstep by Larry. One is angry at why a father would be so demanding on a child even to a point of carelessness but can understand his mind as well. We see Larry go from a character that is pretty unlikable to one that is authentic later in the story.

It’s funny that poker, while still a major component, is not really a primary player in the film. What is truly the primary vehicle in this movie is the study of Molly Bloom and the realization of the magnificent character that she possesses. In this film, Chastain exudes Molly’s integrity, intellect, wit, and possibly overlooked great moral compass that is a marvel to watch on screen.
(Review by Wyatt Head)