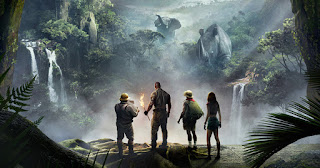 JUMANJI: WELCOME TO THE JUNGLE
* (out of (****)
From top to bottom, Jumanji: Welcome to the Jungle lacks the invention of its predecessor. That film, released in 1995, employed the talents of the late Robin Williams in service of a genuinely clever hybrid of fantasy and adventure with a surprising and rather morbid sincerity at the end. This update, still claiming to be adapted from the Chris Van Allsburg novel, tries for the sincerity in its bookending segments but forgets that there must be something more than trivial moralizing as its connective tissue. As for the “fantasy and adventure” part, well, that problem is located a bit deeper than the surface.

The earlier film’s premise, one might remember, was centered on a board game called Jumanji wherein the player needed to fulfill simple tasks to get to the end. The gimmick was that the “tasks” were usually animals or oversized monsters that would come alive as soon as the player rolled the die. Following a prologue that opens on the closing shot of the earlier film (with the game and its ominous drum beats luring a runner on the beach where it was left to be forgotten by the earlier film’s heroes), this reboot takes on the attitude that, as no one even plays board games anymore, its spirit would transfer itself to a video game console.

There is some comic potential there, and there are times when director Jake Kasdan’s approach to the updated gimmick is clever in how it mimics the functionality of a video game: If an NPC (non-playable character) crosses the paths of the avatars chosen for our young heroes, it speaks a scripted line of dialogue with a programmed response, and if it does not receive that response, it repeats that line of dialogue. That’s about as clever as the screenplay (by Chris McKenna, Jeff Pinkner, Scott Rosenberg, and Erik Sommers) gets, though. Otherwise, there’s an extended joke about how one of the heroes, a ditzy girl glued to the screen of her iPhone, gets turned into an overweight, middle-aged man.

We’ll return to that in a second, as there are the formalities to get out of the way: The characters who discover the video game called Jumanji are a foursome of teens who find themselves in detention: Spencer (Alex Wolff), the nerd, was in for doing the homework of a classmate, and Fridge (Ser’Darius Blain), the jock, is that particular classmate. Bethany (Madison Iseman), the ditz mentioned above, video-chats with a friend in another classroom before her fellow students have finished a quiz, and Martha (Morgan Turner), the loner (who is also Spencer’s crush), mouths off to a teacher about the uselessness of her profession. In other words, they deserve to get the detention they receive because they connive and bicker their way through life and are barely tolerable. Someone among that writing team didn’t think this all the way through.

They each pick characters in the game and then are sucked into it: Spencer becomes Dr. Smolder Bravestone, which is a great name for a video game character (and, indeed, one of the character’s “strengths” is “smoldering intensity). He is a hulking man at more than six feet and 270 pounds, which means he is obviously played by Dwayne Johnson, allowed to have a bit of fun with his own physicality – until it gets old. Fridge becomes Moose Finbar (Kevin Hart), a zoology expert who is two feet shorter than his human counterpart, and Martha becomes Ruby Roundhouse (Karen Gillan), a Lara Croft-type stunning beauty whose strength is “dance fighting.” That sounds neater than it is in practice, because in practice, it’s just fighting while a song plays in the background.

And then there’s Bethany, whose choice of character in Dr. Shelly Oberon is based on the description “curvy genius.” The film’s most prominent joke is that “Shelly” is short for Sheldon, and the avatar is played by Jack Black, whose “curvy” quality is that he is of a certain size not anticipated by Bethany. She also “just can’t” with the physiology that comes with being a man, meaning that Black adopts the vocal stylings of a stereotypical gay male and has a bit too much fun with a scene where the character must go to the bathroom. Why a video game character needs to go to the bathroom is apparently not a question that was addressed in the writers’ room.

In any case, the plot of the video game itself is just an excuse on which to hang action sequences: It’s something or other to do with a glowing crystal that the villain at the boss level, Van Pelt (Bobby Cannavale), stole for himself and that needs to be returned to its rightful place to break a curse, and yada yada yada. They stumble across another playable character (a pilot played by Nick Jonas), and blah blah blah. Action sequences occur, because this is a video game with levels of increasing difficulty, but Kasdan’s staging alternates between cheap-looking and, because the finale is set at nighttime, murky. Jumanji: Welcome to the Jungle finally mimics a mediocre video game on its twelfth or thirteenth run, which is to say it’s the opposite of fun.
(Review by Joel Copling)

Posted by Dallas Movie Screenings at 11:54 AM