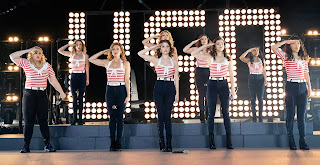 The first Pitch Perfect film in 2012 was a huge hit that increased the number of a cappella groups in college and TV shows. It even made stacking cups a legitimate musical instrument on a hit song. The second movie in 2015, was more of the same musical covers and bordering on a annoying comedic spots. Now the original group, having graduated from college and trying to make a living in the real world are getting back together to go on a European USO tour, that also happens to be a competition. It really would help if you have seen the previous movies to understand the quirks of the various characters and why they are so obsessed with performing as the Bellas.

Beca (Anna Kendrick), got a job as a music producer, but quits when she has to work with talent-less punks without a clue. She shares her flat with Fat Amy (Rebel Wilson) who does street performances as Fat Amy Winehouse, and Chloe (Brittany Snow) who is trying to get into Vet school. They are headed to the Aquarium where they think they are going to do a reunion performance. Instead they were just invited by Emily (Hailee Steinfeld) to watch the current Barton Bella's perform. Aubrey (Anna Camp) suggests they join the USO tour since her officer father maybe able to get them on the roster. They head to Spain with the less than politically correct TV commentators Gail (Elizabeth Banks) and John (John Michael Higgins) following them around with a camera for the documentary they are making of the Bellas. DJ Khaled (playing himself) is planning to pick on of the acts at then end of the tour to open for him. There's a country band, Latin band, rappers, and a all women rock band with the unfortunate name of Ever Moist.

The Bella's seem an odd fit for the type of acts hired to entertain the troops, but their high energy and dancing makes them very popular drawing the attention of DJ Khaled music executive Theo (Guy Burnet), although he may just be checking out Beca. Meanwhile, Fat Amy discovers her gangster father (Jon Lithgow) is around trying to lure her back to him. Fat Amy is one character which we never really got a back story and for this alone makes it worth it. The movie definitely ties up all the ends for the Bellas and we can rest assured they will all succeed in their normal lives, no longer indulging in riffing contests that they never seem to win. Directed by Trish Sie and written by Kay Cannon and Mike White, the last entry of the Pitch Perfect franchise, is probably not the best, better than the second, and a great send off. That is until they plan on doing spin off's with Fat Amy.