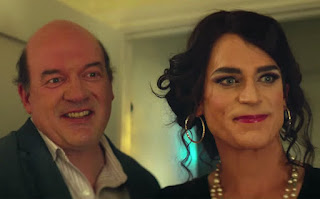 Anything is the debut film directed and written by Timothy McNeil, based on his stage play by the same name. It's an unusual romantic tale o two unlikely partners that doesn't really surprise but it is saved by the earnest and sensitive performances by the actors.

Early Landry (John Carroll Lynch, a familiar face you think you know but can't remember from where) plays a 55 year old insurance salesman who just lost his beloved wife of 26 years. She died in a car accident in which he blames himself which propels him to quietly cut his wrists. The next thing he knows he's being offered the choice of going to a local mental facility or moving to Los Angeles to live with his movie executive sister, Laurette (Maura Tierney). So he moves from his quaint little home in Crane, MS to a big modern California home with his sister, her husband and teenage son. Laurette hovers over Early, constantly worried. So Early finds an 30's court style apartment in Hollywood, just far enough from her. Laurette freaks out, because why Hollywood?, there are drug dealers, prostitutes, and crime. Which of course means that the denizens who live in this court fit the bill. Plus the addition of a drunken postal worker singing his grief from losing his wife every night. Laurette gives him a gerbil to keep him company.

Early is still contemplating suicide. But one night hears his neighbor fighting with someone and his curiosity is peaked. He also meets up with Brianna and David (Margot Bingham and Micah Hauptman) the junkie couple who live downstairs. She calls him a good guy who likes to save people. She writes a pensive song about him which makes him think about his life. Frieda (Matt Bomer) his next door neighbor comes over to borrow some sugar. She hits Early with some truthful attitudes from being a country bumpkin to his wallowing in self pity. Frieda advises him to re-invent himself. He begins to spend more time with her, even going through a withdrawal night when they agree to give up their pain pills. It gets to the point where he wants to have him meet his sister and family. But the dinner doesn't go well when Laurette if faced with the trans-woman sex worker as a potential in-law.

Tierney is great as the worry wart sister who can wrangle million dollar charity events, but has no clue on his to get her brother right again. Especially since her husband and son have no problem with the romance. Lynch plays the sad sack widower who is suddenly waking up to the world around him that is absolutely nothing like his quiet and straight life in Mississippi. Frieda fights his "creepy warmth, the portable pot bellied stove with insinuating eyes". There was some controversy over Bomer's being cast as a trans-woman from LBGTQ community as they believed that there should be a real trans-woman playing the role rather than a cis-man. But Bomer is effective in his role, creating a smack talking character with heart of gold. It would have been nice to learn more backstory on Frieda. But in the end theirs is a pact of trust and the hope for anything.
(Review by reesa)

Email ThisBlogThis!Share to TwitterShare to FacebookShare to Pinterest
Labels: Anything review