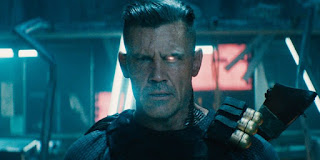 “Deadpool” collides into action again!
After two years of putting the red ninja suit on, the overzealous Ryan Reynolds returns to the big screen as a city killer and antihero called Deadpool who finds life meaningful and dreadful around the city. This time, he has a bigger fish to fry when the something terrible is about to happen around him. Don’t be alarmed, this film will become more brutal than ever.

In this film, Deadpool enjoys life on the outside and the inside with his girlfriend, Vanessa (Morena Baccarin) until the darkness has fallen upon him. Seeing this as a worst opportunity ever, he must from his own team, called X-Force, to find his heart and happy place he wants to be.

The story of this film, like the original, is filled with comedic laughs, bloody surprises, and character expressions. It’s easy to be pay big money just to expose yourself to this dilemma when it comes to comedy knockouts and the fillings of suspense like Alfred Hitchcock’s movies. Not to mention on the little-less numbers of fourth-walls broken became Ferris Bueller phenomenon. The script-writing is well-focused rather than adding more fourth-walls.

Supporting actor Josh Brolin, who came after Avengers: Infinity War, provided the meatier role as Cable the mercenary. His performance was as straight and reutilized as his Thanos character. Actresses Brianna Hildebrand and Shioli Kutsuna also provided a more feminist role ever together. Even the New Zealand actor, Julian Dennison, can fix the problem as Russell, the fiery-fist mutant who controls his powers under anger issues.

The funniest moments I catch my eyes and ears on are the Disney jokes and the ending which appears to be mockery of the ending of 2017 movie, Logan. I suddenly felt that it was a bit dramatic but a lot funnier when Deadpool delivers the wonderful taste of childhood and the elements of Disney towards the audiences. The ending is extremely funny as well as Reynolds is too serious on playing the Shakespeare’s death. To add extra laughs, I enjoyed the post-credits scene which I am incredibly find it very humorous and stunning.

However, I didn’t like the way the director pushed Reynolds too far on the gun-shooting scenes, the bloody on the bodies, and the bones cracking or bending on the character as it would painstakingly be a “flesh and blood” type for this usage for an R-Rated film. I’ll admitted this movie will make your eyes squirt tears heavily. The envy of this is just the increasable method of R-Rated content exposures. Be warned!

On the bright side, this film was little bit better than the original as this film produces more and more intonation on the character development of Deadpool and the team becoming a part of the X-Men family after Wolverine. But be careful about this film since this is the movie for not only adults but also teenagers. If you do wish not to expose yourself, please consider selecting another film to watch like Avengers: Infinity War. By the way, be aware we have Solo: A Star Wars Story coming up in the same month as well as Pixar’s Incredibles 2 next month.

One more thing, if they made sequel of this, let’s see what happens when Deadpool emerges into the Disney universe (possibly Marvel Cinematic Universe) due to Fox is about to be owned by Disney sometime soon. Running time: 120 minutes.

Posted by Dallas Movie Screenings at 9:18 AM