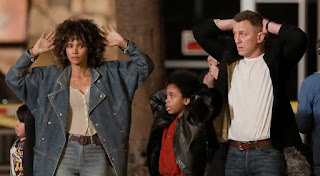 This film is a perfect capturing of the chaos that could occur after an abhorrent event of injustice. It follows a loving woman, Millie Dunbar, who takes children in from the foster care system and cares for them to the best of her ability. Millie, who is played by Halle Berry, is someone who is greatly tied to her community and understands the dire need of her fellow black Americans in the discrimination that they face. In one scene, she pretends to be an angry mother of a black male teen to save him from going to jail.

The acquittal of all the officers charged with beating Rodney King to death brings about a storm of absolute chaos to the streets that endangers the lives and freedoms of everyone in the community. This is a suspenseful story about characters who did their best to protect one another.

Daniel Craig plays Obie Hardison. He is, at first, someone who Millie dislikes with some passion but then she comes to realize that he is truly a good person. He takes her kids in after they think that she is not letting them in after disobeying her.

The frightening notion that one’s children and friends were in danger was communicated well throughout this film. The racial biases and gross mistreatment by the police towards the black American community was astoundingly displayed. The opening scene of a black girl putting orange juice in her back pocket and trying to pay was thoroughly horrific. She ends up being assaulted and shot in the back of the head by the Chinese owner.

The oldest kid of Millie’s, Jesse Cooper, is a genuine human-being who saves a girl from prostitution in an early scene in the storyline. He is someone who is loving of everyone and the most composed young individual in the story. Unfortunately, Jesse is thrown right into the middle of the chaos when the acquittal occurs. Lamar Johnson does a fantastic job portraying this kid’s kindness, gentle nature, and care throughout the film.

The script maybe seemed a little slow for the first third or so of the film. The actual climactic scenes take a while to come to the screen. The idea of how those with little have a protective and heavily connected nature was brilliantly displayed everywhere in the movie. This story was about how people who are faced with injustice come together to protect each other and love one another in every way that they can.
(Review by Wyatt Head)