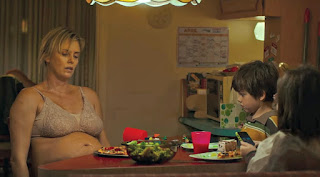 Writer Diablo Cody who knocked all of us across the head, in a good way, with Juno in 2007 and now she is back in full force with this new feature directed by Jason Reitman. Any mother will understand complicated, intense, and brain numbing moments of being pregnant and raising children. Especially with a partner who is not so much help while at the same time trying to be supportive. Charlize Theron who had worked with Cody and Reitman on Young Adult, is outstanding in this as a woman skating on the edge of sanity while balancing the exhaustion of being pregnant over 40 with two young children.

Marlo wasn't expecting to be with child, especially since her last when apparently she had suffered some postpartum depression. Her brother Craig (Mark Duplass) offers to pay for a night nanny. A nanny ninja that watches her newborn at night so she can sleep, only bringing in the baby to nurse. At first it doesn't seem like a good idea to bring in a stranger to house, but the pressures of dealing with her son played by Miles Fallica as the neurotypical Jonah whom the school believes would be better served elsewhere, her husband Drew (Ron Livingston) who is focused on a new project at work, and her daughter 8-year-old Sarah (Lia Frankland). She makes home cooked meals of frozen pizza, and a bag of frozen broccoli zapped in the microwave. After endless days of no sleep, nursing, changing diapers, Marlo considers calling the night nanny may be a good idea after all. Enter Tully (Mackenzie Davis), a bright young woman full of confidence and concern. She quickly assumes control of the new born Mia, assuring Marlo that she is there to care for both of them and sends her off to bed. Tully gently wakes Marlo so she can nurse during the night while sitting close by with a peaceful smile ready to take the baby when she's done. When she comes downstairs in the morning, the house is so clean, even her daughter is surprised.

Life is good now. Marlo seems rested and able to go back to being herself again. Tully is a good influence and a friend. The movie becomes a female bonding empowerment story. Marlo finally lightens up, no longer bogged down trying to be a supermom, she seems on top of it all. That is until Tully says that it's time for her to go.

Theron reportedly gained 50 lbs for this part. Of course no matter how much she weighs, she still looks good while playing swollen and slovenly pulling her shirt up at the dinner table with her kids. How many of us has felt that ultimate moment of just giving it up and letting it all hang out? While the movie seems to portray that 90's wonder woman stay at home mother, it does speak to the sisterhood that mothers need support and help. The husband acts all concerning of Marlo, but when he comes home from a long day, he sits in bed playing video games. Any normal wife/mother would grab the controller and throw it out the window. He may be the bread winner, but they are his kids too. Charlize is amazing in this role. It's worth it just to experience her journey.
(Review by reesa)