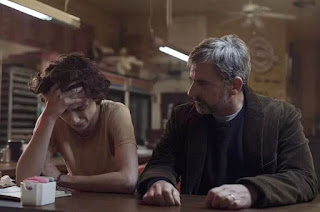 There has been numerous stories about drug addiction that tell of the horror and heartbreak of everyone involved. As this country is once more fighting an opioid crisis, it seems like another public service to bring this problem to the forefront. This new film directed by Felix Van Groeningen, in his English-language feature debut is a more intimate look at the relationship of a father and his beloved son that rings with truth that is not just another Lifetime movie. The screenplay, written by Luke Davies and Van Groeningen is based on the true life memoirs Beautiful Boy: A Father's Journey Through His Son's Addiction by David Sheff and Tweak: Growing Up on Methamphetamines by Nic Sheff.

Steve Carrell plays David Sheff, a writer, who lives with his second wife Karen (Maura Tierney) and their two young children. Nic (Timothée Chalamet) is from his first marriage with Vicki (Amy Ryan). They have a beautiful house by the ocean, and father and son spend lots of time surfing together. Their relationship fills David with pride. After graduation, Nic has been accepted to a few colleges of his choice. One night when Nic doesn't come home, David calls hospitals, goes through Nic's desk looking for clues. When Nic returns 2 days later his car is damaged. David takes an argumentative Nic for treatment. He's got a lot of drugs in his system and he's in denial. They promise that a 28 day program will help him immensely. At first it seems to help. Nic wants to be more independent and put college on hold. When the center calls that Nic had taken off, David drives around in search, finding his son cold, wet and sick. The spiral of on and off drug use begins.

Anyone who has ever dealt with loved ones in heavy duty addictions will understand the guilt David feels about not seeing the signs of his son's need to take the edge off reality. One would think that a handsome young man, a talented writer himself, good schools, loving family, would be so disconnected. When Nic seems to be getting better, he wants to go school now. It seems to be going good, he even gets a girlfriend. Then he pops some pills, and he's back to another downward spiral. At this point, David starts to research everything about addiction. He even tries some drugs to understand.

It's not an easy journey. Nic would show up saying he's been sober and wants some money. Then David gets that dreaded call from the hospital that Nic had an overdose. He gets into another program, he goes to live with his mom in L.A. The yo-yo effect of doing well to giving in to those urges of shooting up becomes a pattern. A certain point, David realizes that the only one that can fix Nic, is Nic. By taking him back, is enabling him to keep thinking he's got a safe place to land.

This is a tough sell. There's no easy solutions, or lovely endings as the sun sets. There is no real insight as to why Nic would feel so insecure to the point where drugs make him feel or not feel. Apparently what Nic had to do to feed his habit is not covered in the movie. It's mostly from David's perspective as he tries to live and function without knowing what is happening to his beautiful boy. Tierney gives a real solid performance as the step mom trying to keep her younger children safe from Nic's erratic behavior without scaring them. Chalamet is making good on last year's nomination that he's not a fluke. His Nic shows all the fear, loathing and uncontrollable need for meth, his drug of choice, while still wanting to please his family and keeps some semblance of sanity. Carrell is also outstanding as the father at the end of his rope trying to reach his son until he realizes that he has to for everyone's sake, he must let go.
(Review by reesa)