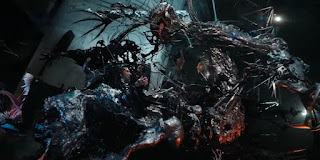 “Venom” spits messy goo onscreen
“Venom” may reach the top like Marvel Cinematic Universe films, but it turns out, this film backfires more than ever according to the critics and audiences. I like and respect the spin-off films, but I did not enjoy several of them as much as the original films. The best spin-off movie I ever seen is “Black Panther,” which is a spin-off from “Captain America: Civil War.” In Black Panther tells a story about T’Challa (known as Black Panther) returning to Wakanda to take his father’s place as king, thought the main concern is cousin, N'Jadaka (Killmonger), who seeks to overthrow him to assume the thrown. I can’t give out any spoilers for “Venom,” as the film

In “Venom,” the story tells about the journalist Eddie Brock who discovers the alien symbiote and gains super-strength powers, granting him the name of “Venom.” Trouble is happening when a leader of the Life Fountain Company named Carlton Drake (under his ego “Riot”) becomes obsessed with analyzing the human subjects and symbiotes illegally. Now Brock must face his biggest challenge as Venom in order to save humanity.

“Venom” became a downfall as the film lacks comedy as comedy is ruled out in the favor of using CGI and special effects much more. Fleischer’s direction is very unlikable and his role of being a director is nowhere near like Ryan Coogler, Jon Favreau, Christopher Nolan, and Brad Bird. I admired Hardy’s performance as Venom as Tom Hardy is the best choice for an antihero’s role, but not so much on supportive actors Michelle Williams (“Manchester by the Sea”) and Riz Ahmed (“The Night Of” television series). The music sounds really great which adds up more points to the film’s structure and plot lines. The plot is okay but cheesy with an ungrateful tone of this whole movie and the cast. I didn’t enjoy some of the action sequences as fifty-percent of them are terrific but the fifty-percent is unpleasant as the story goes through.

Let’s not forget about the special appearance of Stan Lee who made his cameo at the end. Despite not being a creator of Venom, he always have the commitment to show up in many Marvel films, including Marvel Cinematic Universe. This is the scene where the movie redeems itself from receiving a strong negative review.

As a movie director, Ruben Fleischer made his terrific debut on 2009’s “Zombieland,” which received a score of 90% from Rotten Tomatoes. Pretty sure Fleischer could have pull the trigger to make this “Venom” great rather than making up something different. He and the studio wanted to make a film that will actually became a hit and guess what, it backfires them easily.

Not trying to be harsh, but in my personal opinion, “Venom” isn’t a bad movie despite the harsh reviews from critics and audiences. I’m not only a movie reviewer, but also a film student. “Venom” may be considered the geekiest film ever watch. I really want to like this film, but the laughs, the “oohs”, and the “aahs” are missing. If you’re a comic book fan, then you can decide whether or not you want to watch this film, but I highly recommend you to re-consider selecting another comic-book film like “Avengers: Infinity War,” “Deadpool 2,” and “Ant-Man and the Wasp.”