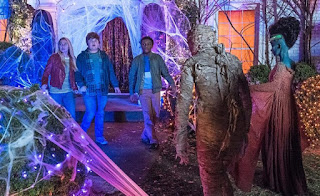 The children's horror book series of Goosebumps by R. L. Stine is back after the first film in 2015. That story had the characters of Stine's books come to life. This version has Halloween characters come to life to terrorize a small town while everyone is out tricks and treating. Directed by Ari Sandel and written by Rob Lieber from a story by Lieber and Darren Lemke brings some zany fun to what could be scary, but it won't freak out the young ones. Considering that going out on Halloween night and people decorating their houses seems to be a thing of the good old days as some places are opting for safe and boring homogenized Harvest Festival celebrations.

Sonny (Jeremy Ray Taylor) and Sam (Caleel Harris) are best friends who started a business called the Junk Brothers so they can find treasures like American Pickers. They get a call to go to a run down abandoned house where they find a box with a locked book inside. Suddenly they find a ventriloquist puppet in the box with a note saying his name is Slappy. The boys decide to take him with them. Outside they meet the school bullies who steal the book and try to steal Slappy too. But Slappy causes the boy's pants to drop. And as they try to escape on their bikes, Slappy causes the bulliesg to have an accident. Sonny is working on a science project about the famous inventor Tesla that once had a electronic tower in their town. He works on his presentation in from of Sam and Slappy, but his model shorts out. After Sonny reads the magic words on the back of the card Slappy comes to life. That's when serious things start to happen. Slappy will do anything for his "family". That includes Sonny's sister Sarah (Madison Iseman) who was betrayed by a possible boyfriend. Sonny gets revenge on those that do his family wrong. Their mom Kathy (Wendi McLendon-Covey) thinks the puppet is a pip and discards the kids warning that Slappy is dangerous.

Slappy gets upset when the kids try and get rid of him. He goes to the Halloween store and brings everything to life. The kids examine the book to find that the book was not finished. They contact the R.L. Stine Appreciation Society but can only leave a message for Mr. Shivers. Shivers is really R.L. Stine (Jack Black) packs his typewriter and heads out. Meanwhile the displays on neighbor Mr. Chu's house (Ken Jeong) which includes a giant balloon spider, mummies and other weird things. Mr. Chu helps the kids escape from the mayhem and to disguise themselves to get to the Tesla power tower to stop Slappy's attempt to destroy the town. Slappy also possessed their mom to become a puppet mom.

It's a crazy wild ride. The relationship of the teen daughter and middle school boys is believable as bickering but loving siblings. Even the bullies who are jerks are sympathetic. And Slappy despite his terrible retributions really only wanted to have a family. It's great to have a Halloween movie that doesn't involve fear and blood. Something for the whole family.
(Review by reesa)