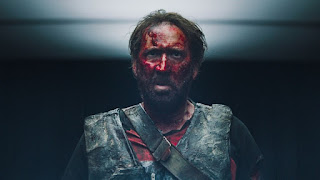 This one is very far out there, but with a worthwhile conclusion in the end. “Mandy,” for all intents and purposes is nothing more than a vengeance story covering the loss of past love and connection. In “Mandy,” Andrea Riseborough’s character is in love with Nicolas Cage’s Red Miller, who just works his day-to-day job only to meet after the end of her shift.

Mandy works at a job where she can spend time reading a bizarre fantasy allegory that also represents her own life as well.

The setting is 1983, and the viewer learns this through Red’s mentioning of Erik Estrada from the “C.H.i.P.S.” TV show from that era. That is only one of the elements on why Cage chose this script. He also mentions the comic book character of Galactus, an evil entity that consumes entire planets.

Cage also delves into the weird mannerisms that accompany some of his work. Like his Oscar-winning role in “Leaving Las Vegas,” he succumbs to a brief drinking habit after he mourns the identity and soul that was Mandy.

He also shares some great scenes with Bill Duke (“Commando,” “Predator”), a close friend of his that was holding some of his weapons of his in storage. Duke’s Caruthers understands his circumstances and wishes him the best, since he feels that he will not see him alive again.

The score is an immersive one, the type wherein the whole theater rattles during the events that unfold send you to another time and place.

The villains in “Mandy” are reminiscent of the cenobites, the evil villains from Clive Barker’s “Hellraiser” entries. In “Mandy,” however they are just run-of-the mill human beings who can actually perish via stabbings, swordplay, chainsaws and anything else that a person can do to eliminate someone from this great planet of ours.

Linus Roache is creepy as all get out at cult leader Jeremiah Sand. Sand feels insulted when Mandy hears some awful music he poured his soul into and she just giggles and laughs. The juxtaposition of his nonsense rants are intriguing, since he intersects shots of Mandy crossed over with himself. Give Cosmatos credit for this, since he wants the viewer to understand his character’s nonsense and fake philosophy.

“Mandy” comes from director Panos Cosmatos, whose father George P. helmed some big flicks from the 1980’s era with “Cobra” and the mammoth hit that was “Rambo: First Blood Part II.”

“Mandy” marks the sophomore directing effort from the filmmaker, whose only other credits were second unit work on his dad’s “Tombstone,” the Wyatt Earp story with Kurt Russell and Val Kilmer.

Panos only other credit is for helming is “Beyond the Black Rainbow,” an avant-garde mystery-thriller which that he also directed in 2010.

Like director Jonathan Grazer’s little seen “Under the Skin” with Scarlett Johansson a couple of years back, “Mandy” delivers, but for those who like their movies with a quirky and offbeat taste. It is also fun to see the Oscar-winning Nicolas Cage chew up some scenery for a few chuckles as well.