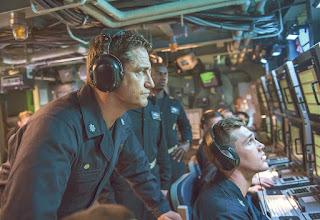 I have said in the past, water movies do not make for good bedfellows when shooting for the silver screen. There was one exception a couple of years back with “American Assassin,” an action-drama that put Michael Keaton as one of the leads in a tale directed by Michael Cuesta in 2017.

Cuseta did a credible job with the little seen “Kill the Messenger” in 2014. He followed newsman Jeremy Renner and his expos of behind the scenes drug trafficking and the involvement with people in the United States.

But that is irrelevant, since “Hunter Killer” succeeds where other water-related tales have failed. The trouble is with most H20 set tales, there is no immediate threat that pulls viewers into the story.

Gerard Butler has become the action hero of late that studios go to for any variety of reasons, namely his looks, his ability to play the everyman and his uncanny knack to just tote a gun around and look natural doing it. A portion of the intrigue rests in the fact his Captain Joe Glass persona needs to retrieve Russian commander Captain Andropov (Michael Nyvquist), who was taken as a bargaining chip by some corrupt Soviets trying to stage a coup in their own Russian government.

His Andropov helps Glass and his team navigate the trenches below, and avoid any of the bombs that are below the ocean floor floating away undetected. The trouble is, however, that despite all of the antics and explosions on the screen, this movie has a kind of low budget feel and look to the entire production.

Gary Oldman plays a major supporting role in “Hunter Killer” as a high-ranking American diplomat. I think Oldman filmed this prior to his turn in last year’s Oscar-winning “Darkest Hour.”

It might have been beneath his wheelhouse, since this role was almost too close to the role he played as the main baddie nemesis in Wolfgang Petersen’s Oscar-nominated “Air Force One” in 1997.

Big time irony also rests in the leads here, because each actor played some form of Count Dracula in the past twenty-plus years.

Butler played the fang toothed incarnation in “Dracula 2000,” a mid-budgeted release from 2000. Oldman played the character in Francis Ford Coppola’s “Bram Stoker’s Dracula” in 1992. Each actor gave their own interpretation of the legend that face an untimely demise in the story.

Going back to “Hunter Killer,” this movie contains some genuine moments of suspense despite the doldrums that occasionally occur. This is a movie worthy of the big screen treatment, since director Donovan Marsh frames this tale for the big screen.

The actor Michael Nyvqist died from a battle with lung cancer sometime last year. He was a great Swedish actor who most recently supported in “I.T.” with actor Pierce Brosnan in 2016.

Despite all the drawbacks that occur, “Hunter Killer” deserves a look for the adventure that ensues in this worthwhile time waster that is worth the investment.

Posted by Dallas Movie Screenings at 11:07 AM