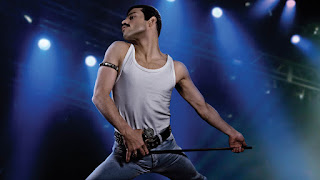 The bigger than life Freddie Mercury of Queen is the subject of the much anticipated feature film directed by Bryan Singer and written by Anthony McCarten. It's a semi-biographical Hollywood version of Mercury and the creation of the legendary rock group which he fronted as the lead singer and inspiration. Whether or not the story is based on true is not really an issue. It's a story that fans can accept and walk away with Queen's music ringing in their heads. Rami Malik who plays Mercury is remarkable and embodies not only the physicality of the performances, but nails the sensitivity and flamboyancy of the artist. Even Mercury's overbite and his four extra incisors are almost a character in themselves.

Before Freddie became Mercury he was Farrokh Bulsara, an immigrant from Zanzibar, living with his family and working as a baggage handler at the airport. One night the band playing at a local club lost their lead singer and Freddie impressed them by singing some of their songs. Before long he's touring around with them, sharing with the them his own music. A year later his ambition gets them to sell their van and put the money towards studio time to make a record. And as fate would have it, an AR guy had stopped by the studio and they get the call to sign with a label. Their record does well, but Freddie wants to next album to explore new ground. The record exec is not that enthused with the concept, especially when their song is over 6 minutes long. But history shows Bohemian Rhapsody blows the group into the stratosphere.

Freddie's life with the band is sometimes contentious as with most closely working groups. Freddie marries his best friend Mary (Lucy Boynton) even though she figures out that he's gay. But he needs her as his center and relies on her as a constant in his lonely life. The fame, the touring, the parties, drugs and manipulative personal manager all take a toll. Freddie ill advisedly caves to the big money of doing solo albums, but realizes that he misses his group...his family as they had become. The inevitable diagnosis of AIDS is heartbreaking. The climatic LIVE AID performance is so accurately portrayed that one would think it was the actual event.

Gwilym Lee as Brian May, Queen lead guitarist, Ben Hardy as Roger Taylor, Queen drummer, Joseph Mazzello as John Deacon, Queen bass guitarist stay basically in the background supporting the legend that became Freddie Mercury. The musical performances highlights guitarist virtuoso of Brian May. Mercury may have been narcissistic, arrogant, extravagant and often times a jerk, but under all that bravado Malik conveys Farrokh's father ethical teachings of having good thoughts, good words and good deeds to heart. You don't have to be a hard core Queen fan to enjoy this film. The music is a blast from the past that remains in our collective memory forever.
(Review by reesa)