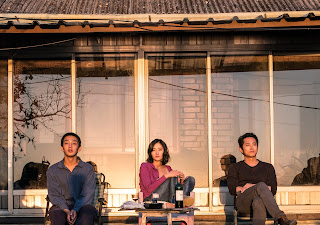 BURNING
**** (out of ****)
The mystery at the center of Burning develops gradually and deliberately, so that the outburst of violence at its end feels utterly inevitable. At just less than two-and-a-half hours, co-writer/director Lee Chang-dong’s film might seem an act of overkill with respect to its significant length, but it is instead a work of building tension so quietly that one might only realize his or her breath has been held until the moment of exhaling. That only comes at the end, when the journey has revealed itself to be as exhausting as it is hypnotic. It is important to begin with the deliberation with which Lee weaves this tale.

This is because the inciting incident of the plot comes well more than an hour into the film, an adaptation of Haruki Murakami’s short story "Barn Burning" by Lee and co-screenwriter Oh Jung-mi. It will take me some time to arrive there, as well, because even as Lee and Oh move deliberately toward this moment, they use the preceding time to burrow us deeply into the headspace of a truly original and unpredictable protagonist. By the time we get to that final scene, Lee Jong-su’s (Yoo Ah-in) myriad of vices and psychological issues will have revealed themselves. Until just before that point, though, the film entirely sympathizes us with him.

It is left up to the viewer to determine on his or her own time whether such sympathy for Jong-su is either warranted or earned, but to this point, Lee and Oh have seemingly worked backward. The film begins with its most intimate close-ups of Jong-su while he remains something of a cypher, and as we learn more about his troubled past and begin to see him as a figure of tremendous sadness, the film slowly pulls back from that intimate vantage point to keep itself and its audience at a careful distance. This would be a problem if Lee didn’t have such a firm handle on this character before that distancing act. This is a tragic story, and it isn’t only tragic for Jong-su.

For half the film, we get a delicate semi-romance between Jong-su and Shin Hae-mi (Jeon Jong-seo), an acquaintance from childhood whom he struggles to remember but who remembers him quite well (particularly for an act that, she says, saved her life). They meet when he wins a watch at a raffle in a shopping district, where Hae-mi works on call. The two share a simple but sweet coffee date, at the end of which she asks Jong-su to do her a favor: He will look after and feed her cat while she is in Africa, her first stop on an eventual series of trips around the world for which she has gradually saved some money. Jong-su agrees, and to complicate things for everyone, they sleep together on the eve of her trip.

Immediately, things seem to be off about Hae-mi, about her trip to Africa, and even about the existence of the cat Jong-su is supposed to be watching. When Hae-mi returns from her jaunt, she arrives with a mysterious fellow named Ben (Yeun Sang-yeop), whose presence makes Jong-su jealous and whose smile is just a little plastic and doesn’t quite seem to reach his eyes. After some time spent in each other’s company, Jong-su still never quite feels comfortable, and then Ben reveals his most curious hobby: He likes to burn greenhouses. He simply picks one, sets it ablaze, and gets away with a crime left alone by uninterested police.

This all only brings us to a certain point in this story, at which a character disappears, another investigates the disappearance, and the third has something to hide. The performances are exceptional at compartmentalizing: Yoo plays Jong-su as a man of few words or expressions in a performance that masterfully weighs paradigm shifts with stone-faced austerity. Jeon, in an auspicious debut, is a bright, natural talent in a complex, deceptively sad role, and Yeun is also quite good as a total mystery with a winning smile. Burning moves deliberately, yes, and by the end, the mystery proves unshakable.
(Review by Joel Copling)