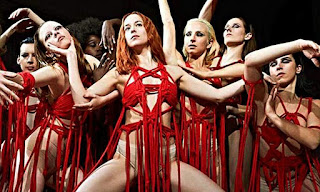 Director Luca Guadagnino who brought us Call Me By Your Name last year goes in opposition to the warm Italian summer to the cold wintry streets of 1977 Berlin. The screenplay by David Kajganich is not so much of a remake of the 1977 film directed by Dario Argento as it is a reimaging of the elements. While Argento's very stylized world was flush with color, Guadagnino's is stark and grey. It's an interesting visually compelling film with very creepy moments. The dance sequences choreographed by Damien Jalet and the haunting musical score by Radiohead's Tom Yorke gives the overall feeling of melancholy to the cinematography by Sayombhu Mukdeeprom who also did Call Me By Your Name.

The film opened with a runaway student Patricia (Chloë Grace Moretz) forcing her way into the office of psychotherapist Jozef Klemperer (Tilda Swinton but billed as Lutz Ebersdorf). She is paranoid and babbling about the teachers at the academy are a coven of witches. After she runs out leaving her bags behind, Klemperer finds her journal which details The Three Mothers, a trio of witches who predate Christianity: Mater Suspiriorum, Mater Tenebrarum, and Mater Lachrymarum. The doctor dismisses her claims but becomes suspicious when Patricia disappears.

Dakota Johnson plays Susie Bannion, who came to Germany from a small Mennonite farm in Ohio. She had secretly attending the dance troops performances in the big city and insisted for an audition to their school with no training. The dance school is run by Madame Blanc (Tilda Swinton) who creates the choreography and inspires the young women. Susie's feral first performance causes the matrons to suspect that she is the pure vessel that they needed. During one rehearsal the lead dancer Olga freaks out and calls the teachers witches before storming off. Susie asks to step in her place and her improvisational movements causes Olga who is a room of mirrors to be physically contorted into a writhing mess. The academy matrons cart her mangled body away using sinister curved hooks.

Susie quickly becomes a protégée of Blanc who appoints her to be the lead protagonist in their new dance, Volk. Susie befriends Sara (Mia Goth) who goes to see Kemperer to find out what happened to Patricia. Kemperer unsuccessfully goes to the police to report the missing girl, but their investigation is misdirected by the matrons. Night of the big performance opened to the public, Sara believes that Susie is colluding with the matrons and discovers the hidden catacombs behind the mirrored studio. She finds what happened to Patricia and Olga.

There is a lot going on in the movie. The battle of power between the unseen head of the academy Mother Markos and Madame Blanc is set against the political upheaval in post-Nazi Berlin and the attacks from the leftist Baader-Meinhof Group. It's a bit confusing as it doesn't seem to fit inside the dance academy which has it's own set of problems. Kemplerer is distracted by the memories of his wife from whom he was separated during the war. He sees a vision of his wife who he follows to the school. He was being lured there to be a witness to the ceremony in the basement.

Overall it keeps perpetrating the myth that all witches are evil and fodder for horror movies. It also sets up the coven of female empowerment and the men in the movie are pretty inept. Mater Suspiriorum, the Mother of Sighs is considered to be the most powerful of the three witches. It is she that governs the direction of the coven which hides in guise of a dance academy. The final climatic scene is so weird and powerful that it will leave one wondering what the heck is going on. It's one of the kinds of movies that will impress you with it's technical brilliance and you will need to go have a glass of wine and discuss with friends.
(Review by reesa)