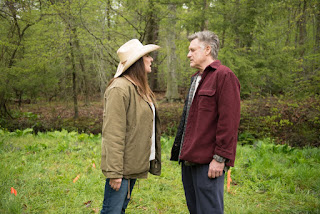 TROUBLE
**½ (out of ****)
Taken separately, the two modes of Trouble are pleasant enough. For the first half of her screenplay, writer/director Theresa Rebeck’s film is distinctively and decidedly a comedy about the wacky misadventures of a brother and sister who are squabbling over the logging rights and land, handed down either to both of them or to one of them, left behind by their father’s passing. The second half is a sincere drama in which the siblings reconcile. In theory, this should be an easy win for all involved. Rebeck gets part of the way there, too, by casting actors of proven talent and tenure in the roles of those siblings.

Anjelica Huston plays Maggie, who has technically taken up residence on the land that once belonged to her father. Bill Pullman plays Ben, who wants to build a house on that land, believing it has been left to both of them. To that end, Ben has recruited his son Curt (Jim Parrack), whom Maggie does not know is her nephew, to confiscate surreptitiously the government paperwork that clarifies ownership. Curt does this with the help of his girlfriend Rachel (Julia Stiles), who coincidentally works at the office that handles such paperwork. At the same time, Maggie intends to press charges against Ben.

This is a fine comic set-up, and the performances, particularly from Huston (amusingly stubborn as Maggie) and Stiles (whose feeble attempt to conceal from the local sheriff, played by Brian d’Arcy James, that the paperwork is no longer in her possession provides a great comic moment for the actress, who delivers on the perfectly timed hesitation and stuttering), are solid. Then Maggie shoots Ben in the shoulder for trespassing on the property one day, and the film’s tone shifts almost immediately. What the audience guesses might happen doesn’t (This truly isn’t a dire affair, after all), but it does reframe a comic story into a dramatic one built on a bizarre contrivance.

Suddenly, the film’s priorities shift, as well, and there isn’t much to the film’s plot beyond the gun-related incident: Ben’s condition worsens, certain revelations come to light involving the whereabouts of the paperwork, Curt’s place in his father’s life comes into question, and the siblings’ friend Gerry (David Morse), who harbors deeper feelings for the sister, attempts to mediate by keeping the peace. Rebeck’s vision for these characters is greatly narrowed by the decision to move away from that comic set-up, doubly undermining it and providing a series of further contrivances to arrive at a happy-go-lucky ending. Trouble features good actors stuck in a rut of circular and trite storytelling.
(Review by Joel Copling)