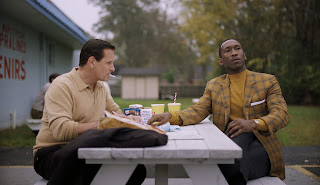 After spending much of his career co-directing alongside his brother Bobby, Peter Farrelly has decided to branch out on his own. The brothers have a few hits, mainly Dumb and Dumber and There’s Something About Mary, but are mainly known for directing silly, insipid comedies. So the name Farrelly attached to a dramedy about the budding friendship between an Italian-American and a Jamaican-American driving through the 1960s south doesn’t seem like a promising match for this director’s first solo outing.

Tony Vallelonga, aka Tony Lip (Viggo Mortensen), works as a bouncer for the Copacabana nightclub in New York City. After spending his nights keeping the peace at the club, he heads home to his wife Delores (Linda Cardellini) and their two kids where he spends his days sleeping. One morning, he’s brusquely awakened by a commotion in his den where he finds his family watching TV, keeping his wife company while two African American men fix the plumbing. Although Delores isn’t bothered by this, the rest of the family is. This scene is used to show Tony’s racist tendencies. After the men leave, he throws away the glasses that Delores has given them to drink from (she later finds them and returns them to the sink).

Farrelly spends a good portion of the opening act establishing the characters of Tony and his family before introducing Dr. Don Shirley. They are loud and crass bunch. Tony is shown to be a smooth talker who always manages to get people to do his bidding. In one scene, he pays the coat check girl for a tough guy’s hat so that he can later return it, pretending like he found who stole it, to get on the guy’s good side – even going so far as to refuse his reward money. In spite of all this, Tony and his family are shown to be warm and loving.

With the Copacabana closing for the season, Tony finds himself in need of a new job. Enter Dr. Don Shirley (Mahershala Ali), a Jamaican American pianist planning a tour with his trio in the Deep South. Don is in need of a driver / bodyguard and chooses Tony to accompany him and his cellist, Oleg (Dimiter D. Marinov), and bassist, George (Mike Hatton), on their eight week tour. The record label gives Tony the Green Book, a travel aid listing all of the African-American friendly establishments in the south, to aide him on the journey.

Don is worldly, educated, well composed, well-spoken, and implied to be a bit of an oddball; the exact opposite of Tony. His lavish apartment, adorned by items such as a large pair of tusks, is located above Carnegie Hall. These two unlikely companions find themselves predictably butting heads.

The performances in Green Book are fantastic. Cardellini is great as Tony’s wife, giving a genuine warmth and heart to the character. But the real draws here are Mortensen and Ali. The dynamic between the two leads is one of the main reasons the movie works so well. Mortensen’s crass, short-fused but friendly Tony is perfectly offset by Ali’s controlled and observant Don. It is unfortunate that Ali’s Don feels more like a supporting part unlike Mortensen’s Tony, who is a more fleshed out character, since Don is the more interesting of the two men.

When the two are driving through Kentucky, Tony gets excited about the idea of eating Kentucky Fried Chicken while actually being in Kentucky and stops for a bucket. He soon finds out that Don has never eaten fried chicken and becomes insistent he try a piece. When Don asks what they do with the bone, Tony demonstrates by throwing his out the window. Don soon joins in but is horrified when Tony also throws his drink out the window. Ali’s facial responses as he reacts to Mortensen’s antics are perfect; the look on his face goes from one of enjoyment to stone-faced dismay. You know where this scene is going next but the delivery still leads to a good laugh as Don makes Tony back up to pick up his trash.

The timing and look of Green Book is also excellent. Shots aren’t held for longer than necessary (a common occurrence in a lot of modern movies) and the dialogue has a good rhythm and flow. This is one of the better edited movies to come out this year. The production design is likewise impressive, giving an authentic look to the time period.

Unsurprisingly, given the film’s title, the color green is a recurring sight throughout. Tony steals a green rock from a roadside stop (Don makes him return it but Tony’s got some deft sticky fingers), rooms and buildings are often in shades of green, and even the car the two ride in is a turquoise color. Why is green significant within the movie? The most likely reason - green represents growth, reinforcing the two men’s change of attitude toward each other over the course of the film.

Much like the recent Hidden Figures, Green Book takes a lighter tone with its subject matter instead of the darker tone that would probably be more appropriate. That isn’t to say that Green Book doesn’t take its subject seriously. Writers Nick Vallelonga (Tony’s son), Brian Hayes Currie, and Peter Farrelly manage to swing the tone effectively between the comedic moments and the more serious ones without ever feeling like two different movies are competing for screen time. Some viewers will more than likely find the movie too pat for their tastes, but if the preview audience is any indication, this is sure to be a crowd pleaser. While the material might not be anything new, the delivery is top notch.
(Review by Bret Oswald)