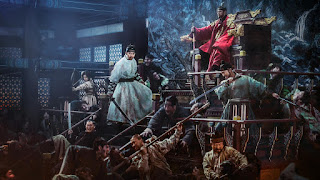 One of the best and truly terrifying zombie movies of the past few years is Train to Busan. Now the producers of that excellent film have created another undead thriller but this time set in the Joseon Dynasty, which is ancient Korea. Is it as good as Train to Busan? Well not really, but it is a fairly epic costume horror film with two of the top South Korean actors, Hyun Bin and Jang Dong-gun. It's got swords, long guns, bows and arrows, and mobs of mindless "demons" ready to feast on your blood. Directed by Kim Sung-hoon who also did Confidential Assignment and written by Hwang Jo-yoon presents a well paced adventure with some edge of your seat moments.

In 1636 after the Manchu War, Prince Ganglim (Hyun Bin) returns to his country after being held as a hostage tribute to the Qing Dynasty in China. All those years away has made him an excellent warrior, but also a womanizer, gambler and with no desire to be in the royal line after his crown prince brother. The port town is deserted and looks destroyed. There are piles of bodies that have been burned. The Prince and his servant, Huk-su (Jeong Man-sik) believe it's a plague, until the sun goes down and they are attacked. The survivors of the town help them escape. They beg him as a prince of the country to send the army to help wipe out the demons.

Back at the palace, the Minister of War, Kim Ja-joon (Jang Dong-gun) has been manipulating the weak king by targeting the peasants as rebels. Kim knows about the demon outbreak and thinks that he can weaponize them to help take over throne and create a whole new kingdom with the help of his crooked fellow ministers. The crown prince admits he's the head of the rebels in trying to change his father's mind about what's happening in their country. He takes his own life to pay for his traitorous actions. He had sent a letter to his brother Prince Ganglim to help his wife and unborn child escape to Qing and out of the clutches of Minister Kim. This is typical historical K-drama stuff with royals and minister jockeying for power. But now we got zombies into the mix.

Minister Kim makes various attempts to kill the Prince, but he keeps surviving with the rebels. Meanwhile the country is being over run with the bitten who are fast moving. In a large crowd they can knock down walls and crawl over rooftops. Even when you think you killed one, they straighten out their broken bodies, the pop back up. It takes awhile for the bitten to fully turn. They can walk and talk, until their eyeballs white out, veins pop out their neck and try to bite someone. There's a bit of Game of Thrones elements in this, where you can't get too attached to a character because they will most likely succumb by sword or bite.

The last act of the movie is some good heroics and the fight between Minister Kim and Prince Ganglim is worth the popcorn. It's great seeing these actors star together especially since they are good friends in real life. It's about time.
(Review by reesa)