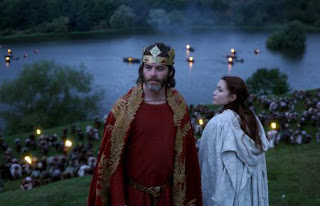 Following brief title cards outlining the tension between Scotland and England, Outlaw King opens with the Scottish lords surrendering to Edward I (Stephen Dillane) after his campaign in the year 1304. Robert the Bruce VIII (Chris Pine) returns to his family home where he marries Elizabeth (Florence Pugh). After seeing that Edward I’s forces have slain and dismembered William Wallace and hung his severed arm up for display, Robert decides to break his vow to Edward I (also convincing his brothers to break theirs) and start his own rebellion against him. When attempting to get John Comyn (Callan Mulvey) to join forces with him, Comyn, who has come to see rebellion as pointless, threatens to report Robert’s plans to Edward I, resulting in Robert killing Comyn. Robert then declares himself King of Scotland, leading to open war against Edward I.

The first feature made by director David Mackenzie following his Oscar nominated critical hit Hell or High Water, Outlaw King arrives with some high expectations. Unfortunately, the film is a disappointment. Outlaw King, written by Mackenzie along with Bathsheba Doran, James MacInnes, David Harrower, and Mark Bomback, does little to help insert the viewer into the situation or to keep them engaged. There is a lot of information to process in this movie, especially with the amount of characters who come in and out of the picture. A few times Robert or Elizabeth got upset over someone dying and I could not remember who the character was or why their death mattered. A pre-final battle speech is included for Pine which brought to mind Mel Gibson’s Braveheart, purposefully perhaps since that movie was about William Wallace, though don't expect anything too riveting from Outlaw King. The speech is brief and doesn't add much.

The film also isn't clear on the passage of time. Other than the year stated at the beginning, 1304, no other dates are given. The events depicted in the movie took place over many years yet Mackenzie's film makes it appear as if the events happened in quick succession, over a much shorter length of time.

There is some fine camera work here. The opening sequence is a long unbroken shot of the lords surrendering to Edward I, following them outside where Edward’s son, also named Edward (Billy Howle), challenges Robert to a sword fight, the camera then returns with the prince (referring to Edward I's son Edward to avoid confusion) back into the tent to be reprimanded by his father for starting the fight before ending by following the group out the back of the tent to watch Edward I launch a flaming rock to destroy a nearby castle. The movie is full of long unbroken takes like this, though none as long as this first scene.

Many of the effects give the feature a cheap appearance. Fire often looks like something from a video game instead of actual flames and the bloody battles are full of artificial blood splatter clearly added later. It was never convincing that these actors were actually in Medieval Scotland.

While performances are mostly fine, none are really worthy of discussion. Pine and Pugh both seem comfortable in their roles, though Pugh gives a more spirited and convincing performance than Pine. Aaron Taylor-Johnson, playing James Douglas (a lord whose land has also been taken by Edward I), teeters so close to over-the-top that his antics and facial expressions come across as comedic at times - which I’m sure was not the intention.

Of the few Netflix original movies that I’ve seen Outlaw King is by far the worst. It didn’t hold my interest and was confusing at times. History buffs who know something about the situation might get some enjoyment out of seeing the story of Robert the Bruce enacted but this is not a movie I’d recommend to most.
(Review by Bret Oswald)