The Girl in the Spider's Web 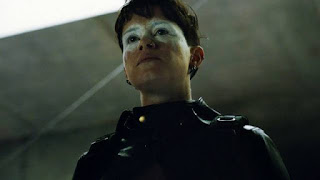 Author Stieg Larsson wrote the trilogy The Girl With the Dragon's Tattoo which was made into a 2005 Swedish film series starring Michael Nyqvist and Noomi Rapace. The American version followed in 2011 with Daniel Craig and Rooney Mara directed by David Finchner. After Larsson's passing a new trilogy was written by David Lagercrantz with The Girl Who Takes an Eye for an Eye being up next. Directed by Fede Álvarez and written by Jay Basu, Fede Álvarez, and Steven Knight this film which follows the American series reboots the cast with Claire Foy as the tough hacker Lisbeth Salander. Mikael Blomkvist, the journalist for Millennium magazine is played by Sverrir Gudnason. Unlike the former films, Blomkvist plays a crucial part of the mysteries with the help of Salander's hacking skills. In this one, he becomes a more secondary character.

Lisbeth Salander has become a super avenger for women who suffer from sexual and physical abuse. The opening scenes she is handing out some merciless judgement on a rich husband and redistributed his bank account to his victims. The news outlet and police consider her among the top suspects. She gets a mysterious call asking for help. She is told a computer scientist Frans Balder (Stephen Merchant) developed a program called Firewall which accesses the world’s nuclear codes. With the help of her fellow hacker Plague (Cameron Britton) they bust into the NSA computers and steal the program. This alerts Special Agent Edwin Neeham (LaKeith Stanfield) who is not only a brilliant computer scientist, but he has scary martial arts skills too. He traces the source and is soon off to Sweden. There he is stopped by the deputy director of the Swedish Secret Service Gabriella Grane (Synnøve Macody Lund) who tells him to mind his own business.

Lisbeth soon realizes she is caught up in some heavy duty international intrigue when the bad guys break in her house and steal her computer wih the program in it. The bad guys are part of a Spider organization that happened to be run my her psychopathic sister who she abandoned when their father wanted to sexually abuse them. After they blow up her house, she knows that Balder and his autistic son August (Christopher Convery) are the next targets. The program can't be opened unless the cryptic password prompt is answered.

Apparently it snows all the time in Sweden because most of the action Lisbeth's escape from the police over a frozen river on a motorcycle would not have worked. It seems every step she takes the spiders are close behind. The action is pretty fast, lots of fighting, lots of dead bodies left behind. Blomkvist who was pretty integral to the original stories is regulated on the back burner in a more supporting role of researching the Spider Society. And Neeham who was determined to catch Lisbeth becomes a better partner than the magazine guy. By the time the sisters finally become face to face you are too exhausted to care. Claire Foy does capture that androgynous image from the books and gives Lisbeth some needed emotional turmoil. Hopefully the next movie will not be so confusing.
(Review by reesa)

Email ThisBlogThis!Share to TwitterShare to FacebookShare to Pinterest
Labels: The Girl in the Spider's Web review