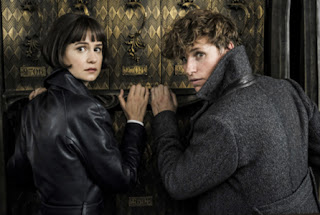 I like it when sequels can continue with the same story without forgetting why people enjoyed the first one so much. That is why I relished every moment of the all-new “Fantastic Beasts: The Crimes of Grindlewald,” a follow-up to the 2016 release I gave the coveted A+ to in my original review.

The story picks up a couple of years later, following the events of the original story, wherein even after a love potion spell was put on baker Dan Fogler’s Jacob Kowalski, he awakens with the exact same feelings and sentiments as before. They were orchestrated by Alison Sudol’s Queenie persona to ensure their compatibility as a couple. The pair enjoy each other’s company , but he cannot be with her because he is considered a “No Mag,” which also means a real life relationship is out of the question.

The story in “Crimes of Grindlewald” focuses on Eddie Redmayne’s Newt Scamander facing off against Johnny Depp’s Grindelwald. Scamander does not usually get involved in matters and dilemmas, since he prefers to be more of the observer type who stays out of the way and avoids predicaments that occur in life.

Jude Law’s Albus Dumbledore plans for him with the duo, since he cannot interfere with their quarrel. It is an unwritten rule and dilemma since Dumbledore cannot have a hands on association with this so-called situation.

Also involved in this tale is Newt’s relationship with Tina Goldstein (Katherine Waterston). The pair shared a great on-screen chemistry that still sizzles in this one as well.

Director David Yates returns with “Fantastic Beasts: The Crimes of Grindelwald” for yet another well-shot made for the big screen tale that looks simply amazing on the IMAX screen. Like the last chapter, Oscar-winning cinematographer Philippe Rousselot also returns as cinematographer. He won an Oscar for shooting director Robert Redford’s familial slice-of-life fly fishing tale “A River Runs Through It” in 1992.

Those who know of the Harry Potter universe will feel right at home here, since it makes direct references to some of the past characters and identities. One actually sees the vistas of Hogwart’s Academy throughout this fun and involving flick.

As far as modern sequels go, I would actually put this one closer to the top. To me, anytime anything happens of significance in the fantasy genre, filmmakers have to bring their best foot forward and create something of notoriety or significance.

The one that I did enjoy was Guillermo Del Toro’s “Blade II” from 2002. It perfectly blended the bloodsucker lore from the comic book and implemented it into the modern day world of modern day Los Angeles. Another one was Del Toro’s “Pacific Rim,” with robots punching giant monsters in the face.

Next up is something I have waited a long time for, a follow up to Jim Henson’s “The Dark Crystal,” a fantasy tale sans real life performers.

I respected and admired what Yates did with the material here and look forward to seeing what he and writer J.K. Rowling can bring to future chapters in these tales.