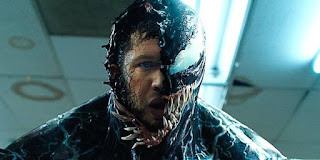 The Marvel Universe is huge with multiple characters attacking and saving this world and beyond. Unless one is a comic book nerd, it's hard to keep track of who and what and in this case why. Does Venom belong in the Spiderman world and that means he would eventually belong to the Avengers universe? Is this just a stand alone entry? Will there be more? Obviously yes, since the extra scenes after the credits indicate a continuing adventure. Are we being overloaded with CGI superhero mayhem? Directed by Ruben Fleischer from a screenplay by Scott Rosenberg, Jeff Pinkner, and Kelly Marcel, the film throws the audience into the action without much explanation on the alien creatures. The beginning of the film sets up the action with a privately funded space craft carrying capsules of specimens crashing in the jungles of Malaysia. Something has taken possession of one of the pilots.

Back in San Francisco, Eddie Brock (Tom Hardy) and his soon to be bride Anne (Michelle Williams) are stupid in love. Anne works for the LIFE Foundation run by Carlton Drake (Riz Ahmed). He's the boy genius who built his company with the idea of creating a better world. Of course he's a nefarious actor who funded the ill fated specimen gathering expedition. He is experimenting on the remaining samples saved from the wreck. His team of scientists have discovered that the "creatures" are symbiotic taking over a living host. Drake thinks that it will be a good way for humans to visit other planets. Eddie, an investigative journalist, is assigned to interview Drake, but he has to play nice. Unfortunately, he had peeked at this girlfriends computer and found information that smells like something is afoul. He confronts Drake, which gets Eddie fired from his job, and Anne also gets fired and breaks up with Eddie.

The first part of film kinda chugs along establishing characters and motivations. One of the LIFE scientists calls Eddie because Drake has decided to up the experiments to human trials. Homeless people are gathered up and brought in as volunteers. The symbiotes end up eating their hosts from the inside. Dora (Jenny Slate) sneaks Eddie into the lab where he finds one of his neighborhood street people. He tries to break her out but ends up getting infected by the creature within her. He doesn't realize what is going on until the symbiote helps him escape.

The rest of the movie involves Drake and company trying to retrieve their property and Eddie trying to figure out why he is exhibiting some strange behavior and hears someone talking to him in his head. Hardy fluctuates from his regular guy persona and his Hyde hybrid with the "James Brown lounge lizard" vocals. There are some silly moments when he tries to explain to his ex girlfriend in a restaurant where she is having dinner with her new boyfriend. He ends up jumping in the lobster tank eating the live lobsters. Venom has the need to eat live things, including biting off the head of the bad guys trying to pursue them. Venom tells Eddie that his species had planned to be discovered so they could invade earth to eat and destroy it. But having absorbed Eddie, it decides he likes it here and wants to stop the other of his kind who wants to take the spaceship back to get the others.

Early critics of the new Marvel entry were harsh in it's assessments. It's really not that bad. It's pretty much just more of the same as far as structure and plot line. Hardy is always a joy to watch, while Williams doesn't have that much to do except for some pluckiness in the final act. It still doesn't explain anything about Venom's origins or why Eddie was able to be a carrier for it when others failed. Maybe this will be addressed in the following sequels. In the meantime, just watch, enjoy, forget.
(Review by reesa)